Watch: The Oregon Protesters Are Surrounded By Authorities — And They’re Streaming the Standoff Live

One occupier was killed and eight were arrested Tuesday night as tensions with police finally boiled over. 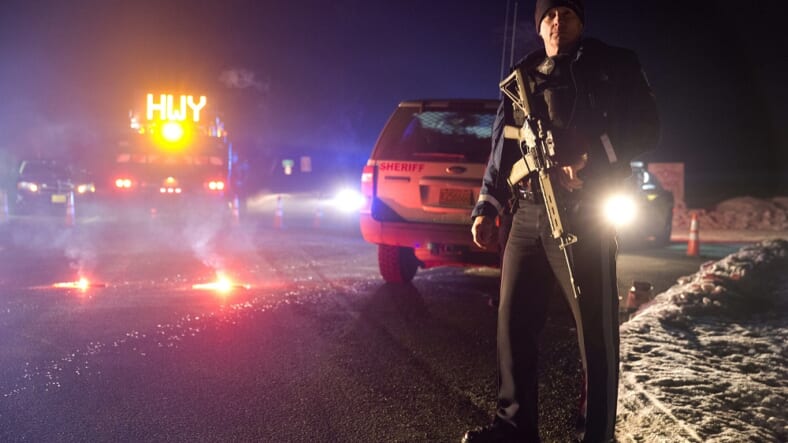 The conflict that had been brewing between police and armed protesters who seized the headquarters of the Malheur National Wildlife Refuge in Oregon finally boiled over Tuesday evening. Eight of the occupiers were arrested and one killed after allegedly attacking police, while the remaining armed protesters were surrounded by authorities as of Wednesday morning.

The occupation, which protesters claim is against government control of public lands that should be made available for ranchers, continues complete with a livestream of heavily-armed protesters bracing themselves for the worst.

According to Reuters, the violence that erupted Tuesday began with a police stop:

The FBI said gunshots rang out after officers stopped a car carrying protest leader Ammon Bundy and others near the Malheur National Wildlife Refuge. Activists said Robert LaVoy Finicum, a rancher who acted as a spokesman for the occupiers, was killed.

FBI agents were setting up a perimeter on Tuesday night around the wildlife refuge, where some people were still holding out, continuing their protest against federal control of large tracts of the country, a law enforcement official told Reuters.

One of the remaining occupiers, Jason Patrick, told Reuters by phone they would stay until the “redress of grievances”.

Reuters reported that the FBI  said attempts to arrest the deceased protester, LaVoy Finicum, were based on probable cause. In an account of Finicum’s death, the Oregonian reported that he “was shot and killed after he charged police during a roadside stop,” based on an account posted on Facebook by Mark McConnell, who claimed he’d been a driver of one of the protesters’ vehicles. McConnell made his claim in the video embedded below.

Here's the video of what happened.

The militia members who were taken into custody were being held in the Multnomah County Detention Center, reported the Oregonian.

In addition to the arrests in Oregon, Jon Ritzheimer — noted for his angry video regarding numerous “self-care” items sent to the protesters — was arrested in Arizona. All those arrested face a felony charge of conspiracy to interfere with a federal official, according to the Oregonian.

Remaining protesters didn’t indicate what their plan was, Reuters reported. The news service quoted protester Jason Patrick, who said, “I don’t know what to tell you but if somebody saying ‘peaceful resolution’ comes in and points guns at me…”

Should the livestream remain in place, we might get a chance to see what Patrick left unsaid.