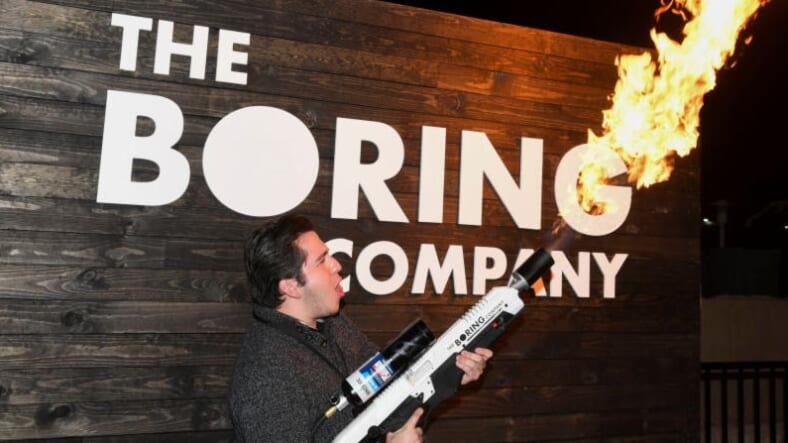 Seems like if there’s one family you don’t want to run afoul of, it might be Pablo Escobar’s. Whether he meant to or not, Elon Musk allegedly did just that, and now the late drug lord’s brother Roberto wants a huge chunk of money as compensation—$100 million, to be precise.

The problem thankfully has nothing to do with cocaine business, though. It’s Musk’s infamous Boring Company limited edition flamethrowers.

Roberto Escobar first made the claim early in 2019, when he was feeling litigious—he also went after Netflix and his attorney says the streaming giant settled out of court.

More from the Telegraph:

Mr Escobar’s latest target, [his attorney] told The Telegraph, was Mr Musk, who he accuses of stealing his idea for a flamethrower.In January 2018 Mr Musk’s company, The Boring Company, begun selling a novelty device using a small propane tank and trigger mechanism to project burning fuel. The product is called Not-a-Flamethrower – the result of customs regulations against transporting flamethrowers.Mr Escobar alleges that Mr Musk stole his concept for the flamethrower after one of Mr Musk’s engineers visited the Escobar compound in summer 2017.

Musk’s initial response to the allegation was to tweet about it.

But obviously that didn’t take care of the problem.

In an email to the Telegraph, Roberto Escobar sounded pretty implacable. “We will soon file a $100 million case against him in America, and I will try my best to make sure he loses his stronghold in Tesla Inc.”

Escobar even told the British paper that he has a musician working on a “hate song” about Musk and that the Tesla billionaire “knows exactly what he has done to us.”

Escobar was clearly ready to take on all comers in his response to the Telegraph, even saying he was preparing to challenge Apple’s electronics market dominance, but he needed to keep those plans under wraps for now.

The Boring Company is no longer selling Musk’s flamethrowers from their website, but you can find them for sale on auction sites for up to $1,200.

Price point-wise, Escobar does have The Boring Company beat: his flamethrowers are going for a mere $249.