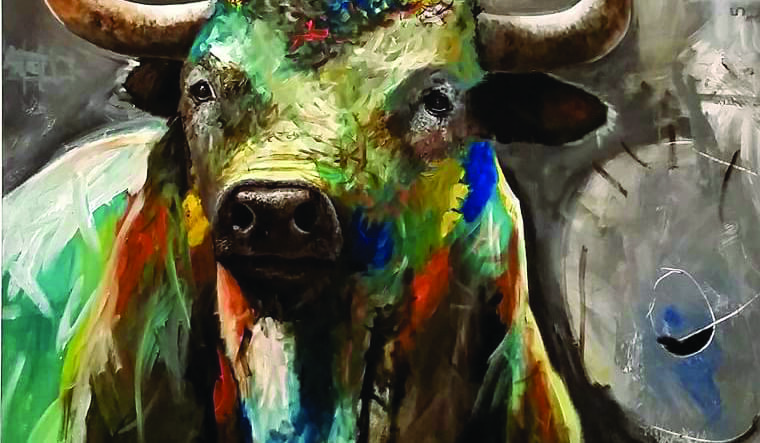 Artist Abraham Mojica’s career began with an ending, in the form of the sudden tragic death of a family member. It haunted him for months as he sought emotional support in therapy, friends and even the bottom of a glass.

Seven years later, after giving up his contracting business, he now dedicates himself to art full time. He has no gallery representation, but doesn’t need it, selling his oil and acrylic canvases to a list of private clients. “It’s been crazy, man,” he notes. “I have a waiting list of almost six months. Don’t ask me how.”

Often painted with two brushes at once, his subject matter ranges from portraits to animal figures— horses, tigers, and bulls, which, for Abraham, mean fertility and intelligence.

“Each animal has a meaning. I try to be universal in my paintings.” Also included are enigmatic compositions like Amor est vitae essentia, his version of DaVinci’s The Last Supper in which Jesus wears a medical mask amid a table full of spacesuited disciples.

“I try to incorporate all my stuff into the painting, symbols and numerology,” he says of works depicting his own brand of abstraction.

Recurring symbols include airplanes and paper boats, like the kind he used to launch as a child after a heavy rain, imagining them sailing off to faraway lands.

“The paper boats are about faith and hope. And the airplane—always keep moving forward. Don’t stop, don’t let anyone mess with your hopes or your dreams.”

The content of his canvases is a reflection of his years spent growing up in Guadalajara, Mexico, touring in a Mexican circus as a mime and magician. Before that, he travelled solo through Latin America, performing as a mime just for fun.

And somewhere in there he attended seminary, thinking he wanted to become a priest. He would have been the most lethal father in the clergy after 17 years studying and teaching martial arts.

When San Antonio starts to feel a bit too familiar, he maintains a studio in New York, and one in Miami for a change of pace. With no formal training, Abraham looks to old masters like Caravaggio for technical pointers.

“I try to look out for accidents, I look for the mistakes. I like the accidents that go outside the lines. And it’s 100 percent cathartic, more like therapy,” he says, harkening back to the tragedy that started it all.

“I used to live for the wrong reasons—material things, the house, the car and all that. You realize you don’t have time. We spend a lot of time in bullshit, being depressed, being sad.”

He points out, “We spend a lot of time being negative, and man, we don’t have time. You can die any moment, so you better be happy. You better enjoy this life, enjoy your situation, no matter what it is. Enjoy it. Be happy.”