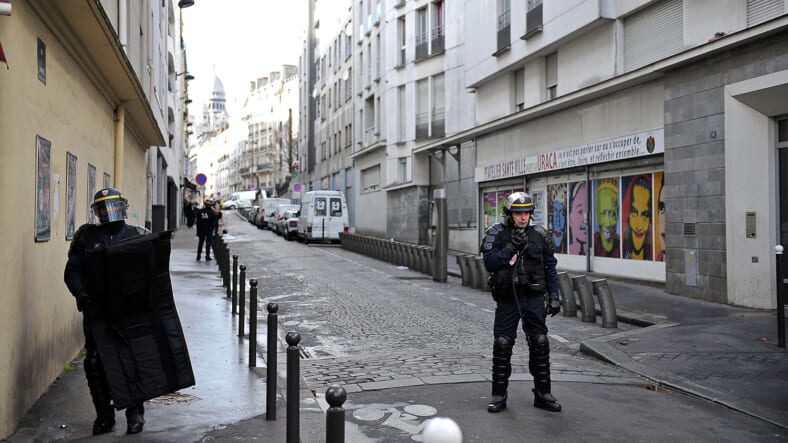 A man who attempted to enter a Paris police station while brandishing a butcher knife and wearing a “fake suicide vest” was shot dead by French police on Thursday, the Guardian reported.

Anti-terrorism authorities quickly discovered the man was “wearing a pouch under his coat with a wire hanging from it” and called in bomb disposal units to inspect the body, but the device “contained no explosives,” a police source told the AFP.

The attack sent ripples of anxiety across the city. Thursday marks the one-year anniversary of the jihadi attack on the Charlie Hebdo satirical newspaper. Gunman opened fire in the newspaper’s Paris headquarters, killing twelve people, including eight members of the publication’s editorial staff.

The magazine was targeted for its satirical portrayal of the prophet Muhammed, a depiction considered offensive in Islam.

On Monday, Charlie Hebdo published a defiant cover featuring a blood-spattered zealot accompanied by the words, “One year on: the assassin is still out there.”The cover is meant to denounce “fanatics brutalized by the Koran” and ridicule terrorists who might target publications for “daring to laugh at the religious,” according a magazine editorial from manager Laurent Sourissea.

Despite the ominous timing of today’s incident, French Interior Ministry spokesman Pierre-Henry Brandet told French media that it “was too early to say whether or not the incident was a terrorist attack.”The city has been on edge since a series of coordinated terror attacks carried out by ISIS in November left 130 dead.

This is a developing story. We will continue to update this story with new information as it becomes available.