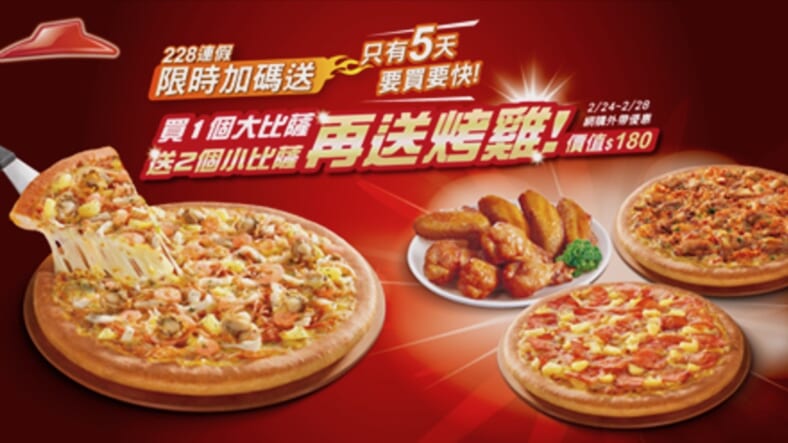 It is not uncommon for fast-food chains to offer special promotional deals on national holidays. One-time-only Halloween treats and Christmas dessert discounts are all par for the course.

Pizza Hut Taiwan, whose CEO deserves far worse than a slap on the wrist, chose the anniversary of the nation’s deadliest massacre to announce a “killer” promotional deal on Facebook.

The deal was offered on a five-day holiday period commemorating the “2-28 Incident.” For those unfamiliar, February 28, 1947 is the day the Republic of China government squashed an anti-government uprising, massacring as many as 50,000 Taiwanese. This marked the beginning of a 38-year-long period of kidnapping, murder and torture of political dissidents, known as the “White Terror.”

So… not exactly the time to offer customers discounted pizzas with the caption “Ready to celebrate February 28?”

The absurdly tone-deaf ad naturally prompted nearly 2,000 irate comments in Mandarin, many calling on wholesale boycotts of Pizza Hut. “I dare you, Pizza Hut, to celebrate 9-11 in the U.S.,” one comment read, “or to celebrate the slaughter of Jewish people in Germany. I dare you.”

Pizza Hut Taiwan has since apologized in the comment section and has adjusted the ad to read “Ready for the holiday?” rather than “Ready to celebrate February 28?”

Still, we’ll hit up Dominos instead next time we’re in Taiwan.