“They picked the wrong pride and became a meal.” 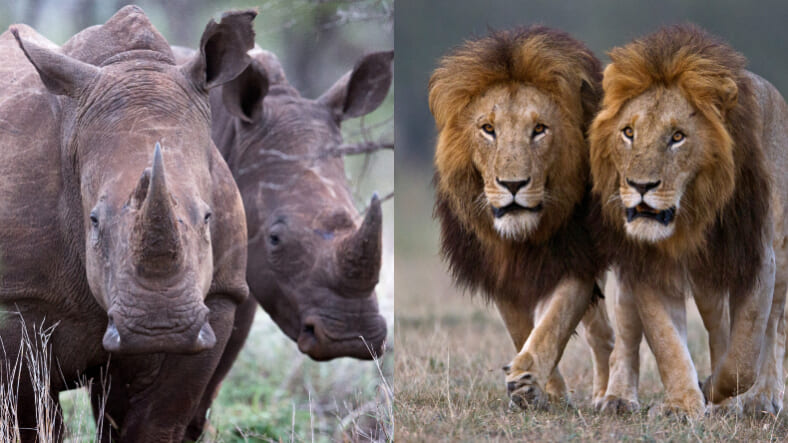 It appears the hunters became the hunted after a gang of poachers broke into a South African game reserve to slaughter rhinos for their horns.

The Independent reports that at least three suspected rhino poachers are thought to have been viciously mauled and eaten by a pride of lions.

Authorities discovered a human head and bones among other hunting equipment on Subuya Game Reserve grounds near Kenton-on-Sea in Eastern Province, South Africa.

Three pairs of shoes were also recovered in the area, as well as a number of hunting rifles, wirecutters and an axe. A police helicopter was called to search for the poachers but none were located. A police spokesperson confirmed the deaths and said the items that were left behind would be taken to a laboratory to confirm if the group were poachers.

“The lions are our watchers and guardians and they picked the wrong pride and became a meal,” said Nick Fox, 60, who owns the reserve.

“Whilst we are saddened at any loss of life, the poachers came here to kill our animals and this sends out a very clear message to any other poachers that you will not always be the winner.”

Poaching has long been a problem in the African country. The most recent illegal rhino killing occurred just days ago.

The South African has further details:

Just last week, another rhino was killed at the Kragga Kamma Game Park near Port Elizabeth, despite being dehorned just a week prior to its death.According to conservation group, Save The Rhino, poaching incidents in South Africa have increased drastically in recent years, with 2014 recording an astounding 1,215 incidents – a steep climb, considering that only 13 rhinos were killed just seven years prior in 2007.The numbers have ever-so-slightly declined, but remain high, as last year recorded 1,028 incidents of rhino poaching.In total, over 7,000 rhino have been killed in South Africa over the past decade.

In this case at least, karma found its place in the circle of life.