Polar Bears and Grizzlies Are Mating to Make Hybrid Predators

Whether you call them “pizzlies” or “grolar bars”, they’re born to kill. 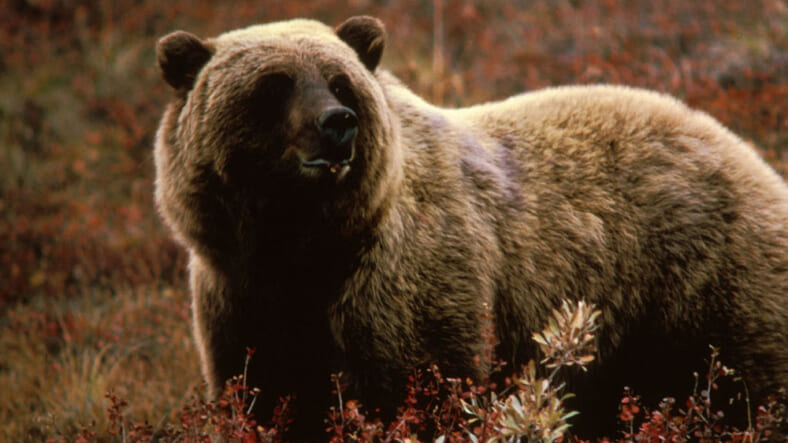 It sounds like the germ of an idea for a cheap monster movie: an increasingly number of polar bears are mating with their cousins the grizzly bear. Hunters and gamesmen near the Arctic Circle have occasionally encountered possible polar-grizzly hybrids—grolar bears or pizzlys—in the past, but apparently they’re becoming much more common.

A report in the Guardian details a recent unfortunate encounter between a pizzly and the wrong end of a hunter’s gun:

A bear shot in the frigid expanse of northern Canada is believed to be a grizzly-polar bear hybrid, a consequence of the increasing interactions between the two imposing bear species.Hunter Didji Ishalook originally thought he’d shot a small polar bear but he said it was a “half-breed” – a position backed by several bear experts. The bear was shot near the small community of Arviat, located on the Hudson Bay within Canada’s Arctic region.

Didji Ishalook reportedly described the bear as looking “like a polar bear but it’s got brown paws and big claws like a grizzly” and indicated the shape of the bear’s head was grizzly-like.

The Guardian reported that pizzly sightings have increased a great deal in recent years in part due to a big warm-up in the Arctic Circle, which forced these lumbering mountains of fur and rage into closer proximity as grizzlies moved north and polar bears spent more time on land. According to scientists, the genetic similarities between the species are such that they will mate with little hesitation.

Grizzly bear expert Chris Servheen told the Guardian that disappearing sea ice in the Arctic is putting the polar bear in jeopardy. These predators, which can weight nearly a ton, will likely continue to overlap.

Though Servheen sounded a reassuring note when he said it will take “hundreds of generations before we really see a new type of bear,” we felt it might be a good idea to caution to any explorer hunting for the elusive pizzly or either bear that contributes to its DNA—maybe don’t.