Politicians May Soon Have to Disclose Donors Right on Their Clothing

And now, a word from our sponsors… 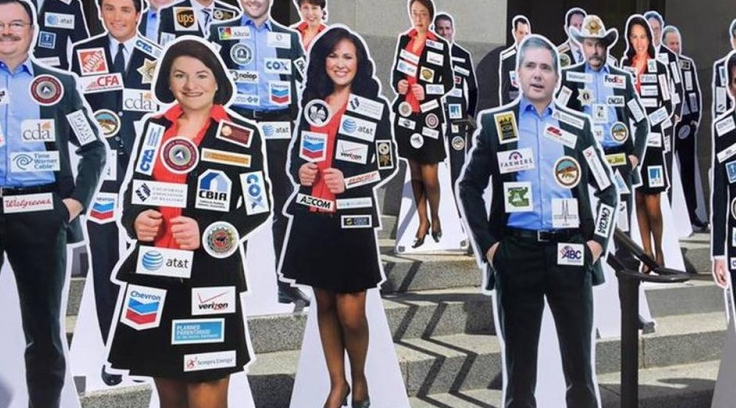 A California businessman has cooked up a novel way to inform the public about the flood of money sloshing around in our democracy and turning our political representatives into wholly owned subsidiaries of major corporations, unions and random members of the One Percent.

John Cox, a real estate tycoon and attorney, is offering a state ballot initiative in California that would require lawmakers to literally wear their donors on their sleeve. Anyone accepting campaign donations (which is more or less everyone in elected office) would be forced to emblazon their Today’s Man pinstripe suit jackets and Talbot’s tunics with “stickers or badges” bearing the names or logos of their top 10 donors whenever they are on official business.

Cox created an organization called California Is Not for Sale to push the idea, and he has expressed his willingness to pony up a $1 million to paid canvassers to go round up the required signatures to get the initiative on the ballot.

“It’s going to be immensely popular,” Cox tells U.S. News & World Report. “We have a system under which people who want something from government fund the campaigns of the people who make those decisions. In any other solar system that would be considered corrupt.”

Whether the idea would survive a court challenge remains an open question, but with the political campaigns of Donald Trump and Bernie Sanders advocating for more disclosure, this seems like an opportune moment to add some transparency to the system.

And if our elected officials don’t like sporting a bunch of unsightly patches on their pinstripes, I’m sure a collection of neck tats and tramp stamps would also be acceptable.