This is WAY worse than mom walking in on you. 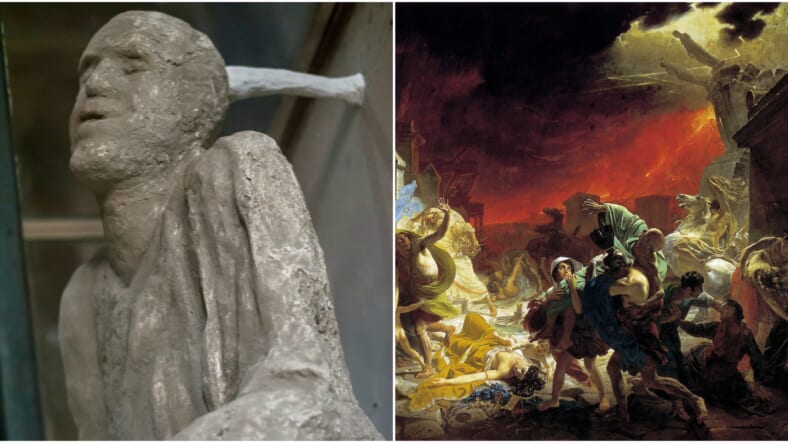 When Mount Vesuvius erupted in 79 A.D. near the Roman city of Pompeii, a suspected 11,000 souls were buried in volcanic ash.

Many of their fossilized remains are impressively intact, which paints a shockingly clear image of their final moments. Some were covering their mouths from the blazing ash while others were desperately embracing loved ones.

One man, however, truly went out with a bang.

A photograph posted to the Ruins of Pompeii’s official Instagram account reveals how one victim spent his dying breaths: with his right hand in a position that should still be familiar to many today.

What a touching way to spend one’s final moments…

Talk about fiddlin while Rome burns.

Sadly, “volcanologist” Pier Paolo Petrone told The Daily Dot such theories are misplaced. The man was probably too busy burning alive to be choking the chicken.

“The individual in the photo is an adult man, killed by the hot pyroclastic surge (hot gas and ash cloud which killed most of the population living around Mount Vesuvius), with both arms and legs flexed due to the heat.”

“Most of the human victims found in Pompeii often show ‘strange’ position of arms and legs, due to the contraction of limbs as a consequence of the heat effect on their bodies after death occurred.”

Still, Dr. Petrone couldn’t explain why his right hand was clenched over his junk.