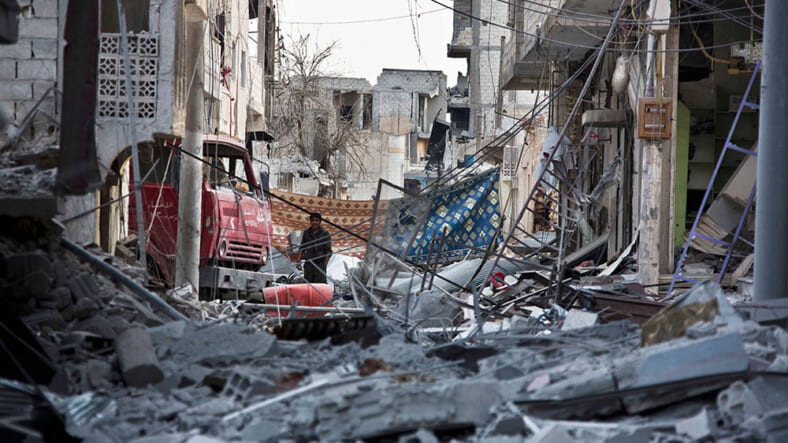 The war against ISIS isn’t over, but thanks to the efforts of the United States, Russia, and nations bordering territory held by the terrorists, the Islamic State is shrinking, according to studies cited by the Washington Post.

In just over a year, the jihadi enclave has lost some 22 percent of territory it had held in Iraq and Syria. A study referenced by the Post from IHS’s Jane’s 360 stated that there are clear indications “the tide…is turning” agains ISIS and gave evidence in addition to territorial losses:

Following the loss of Tal Abyad, IHS began picking up indicators that the Islamic State was struggling financially, which included various tax hikes, increases in the cost of state-run services, and significant cuts of up to 50% in the salaries paid to Islamic State fighters. These financial difficulties have been exacerbated further by both US-led Coalition and Russian airstrikes on the group’s sources of oil revenue since late 2015.The loss of access points to the Turkish border, and heightened border security on the Turkish side, have significantly reduced the flow of goods and potential recruits into the Caliphate. Although local smuggling channels still operate, the risk of detection, and therefore the associated cost have skyrocketed.

Jane’s 360 concludes that ISIS “is increasingly isolated, and being perceived as in decline.”

This is a good thing on the surface, but as the Washington Post notes, a study done by the Institute for the Study of War emphasizes the fact terrorists don’t confine their efforts to seized territories. The attacks in Paris in late 2015 were plenty of proof jihadis inspired by the Islamic State’s odious version of Islam are interested in striking wherever they can manage the logistics.

Even if the ground war against ISIS quashes the group’s “caliphate,” ISIS may be with us for some time to come.