Meet The Billionaire Investor Whose Advice Can Make You Really Rich 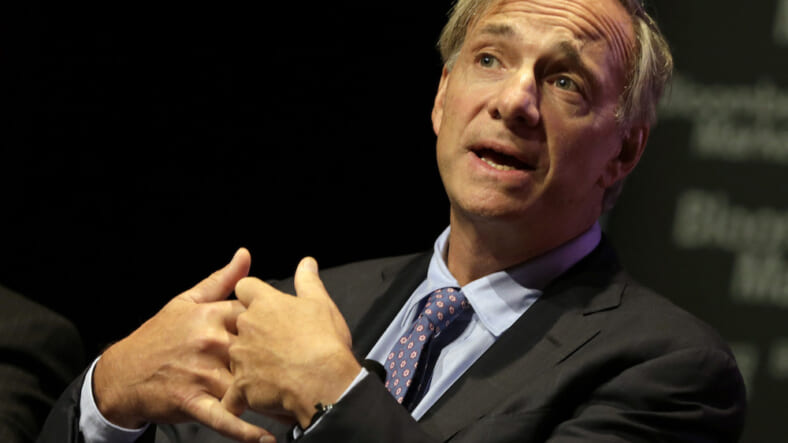 When Ray Dalio was eight years old, his jazz musician father,
Marino Dallolio, moved the family from Jackson Heights,
Queens, to Long Island. Like many kids, young Ray had a
paper route and did odd jobs around the neighborhood, mowing
lawns and shoveling snow for pocket money. When he was 12, he began caddying
at a nearby golf club.

The club’s membership included quite a few Wall Streeters, and having
become interested in the market from what he’d overheard on the links, Ray
bought 60 shares of Northeast Airlines with $300 he had managed to save.
When Northeast subsequently became a takeover target, the stock tripled;
by the time Ray graduated from high school, he had several thousand dollars
invested in the stock market.

Dalio has said he fears boredom and mediocrity far more than he fears
failure, and perhaps that’s because he’s rarely failed during his storied career.
He founded the world’s largest hedge fund firm, Bridgewater Associates,
which manages about $160 billion in assets and has seen almost $50 billion in
gains since its inception through 2017, more than any other firm in the category.

One of the world’s 100 richest people, Dalio has a personal net worth of nearly
$14.6 billion, according to Bloomberg—more than the GDPs of Guyana,
Montenegro, and Fiji combined. His 2017 book, Principles: Life & Work, is a
New York Times No. 1 best-seller.

Says trader, columnist, and former CNBC host Jeff Macke, “There’s a score board
in the hedge fund world, and Ray Dalio is amazing at making money—
anyone who says otherwise is just a moron.”

Dalio started Bridgewater out of his apartment in 1975 after he was fired
from brokerage firm Shearson Hayden Stone, where he worked on the
commodities futures desk, for slugging his boss at a New Year’s Eve party.

Ten years later, at the age of 36, Dalio, whose macroeconomic investment
strategy is largely based on predicting movements and trends across the
global economy, was managing pension funds for the World Bank and
Eastman Kodak. He later added clients that include the Pennsylvania
Public School Employees’ Retirement System, General Motors’ corporate
pension fund, and Singapore government-run sovereign wealth funds such as
the Government Investment Corporation of Singapore.

“Ray had great vision about where the investing world was going; he took
the idea that massive diversification of positive expected value bets would lead
to the best outcome in the long run,” says a former employee who worked at
Bridgewater for more than a decade.

The ex-employee, who asked to remain anonymous in order to speak openly,
started at Bridgewater when the firm had fewer than 20 employees. Today it
has about 1,700. Working there was fun, he says, with no dress code and all night
Christmas parties at Dalio’s house in Wilton, Connecticut. To be sure,
the fun didn’t extend to the actual trading part of the job, which was, and
continues to be, taken extremely seriously by all, particularly Dalio.

“One of my favorite ‘Ray stories’ is, I think it was about 1990, when Ray came
into the office even though he was ill, and we had a meeting scheduled,” the
former employee recalls. “Ray decided we should go ahead with it, and maybe
halfway through the meeting he reached over for the garbage can, dragged it
next to his chair, and threw up in it. Then he pushed it aside and we continued
the meeting like nothing happened.”

Importantly, Dalio “knew the value of people who excelled in areas where he
did not,” says the former employee. He was never satisfied; he always wanted to
know more and do things better. And one of the ways he could do things better
was to hire people who would challenge and question him.

To get hired at Bridgewater, candidates are subjected to no fewer than five
personality tests—four online, one by phone—to determine their “type” before
they even sit for their first interview. Once they’re hired, new employees take a
sixth personality survey that lasts up to three hours.

“I think Ray was kind of cutting-edge in seeing those behavioral and personality patterns as critical not just to whether or not the person is a fit for the company but if they’re right for the specific role or team,” says Dalio’s former assistant, Kathleen O’Grady. “I’m like what you’d call an Impact or a Connection Tilt, and he’s more of a Structure/Clarity Tilt.” (The term refers to the Tilt 365 personality assessment, which helps teams discover the core strengths that create consistent, predictable behaviors that generate innovation.)

All the combined data is then reportedly run through an algorithm and the results put on the person’s “baseball card,” which is available to every other
employee at the firm and scores traits like personality, values, and abilities.

The baseball cards are living documents of sorts—everyone is rated 15 times a
week on 75 individual attributes. There are weekly “homework” assignments, and
mutual criticism sessions called “public hangings.”

“I remember my office mate, who was Ray’s accounting person and a very
meek sort of individual, used to ask me to slip her expenses in with mine for him
to sign off on,” says O’Grady. “Obviously, Ray is a very intimidating guy, but he
really isn’t if you push past the veneer.”

All staffers are issued a 123-page management “bible” containing Dalio-penned dictums,
which he began compiling in the mid-2000s; it is the basis for Dalio’s Principles.

“Don’t ‘pick your battles.’ Fight them all.”

“Ask yourself whether you have earned the right to have an opinion.”

Bridgewater staffers attend a three-week “Principles” boot camp and are
expected to adhere to Dalio’s guidance in a near-religious fashion, which has led
to accusations of the company being “cultlike.”

“Certain elements of the Bridgewater culture taken out of context can seem sensational
or nutty, but as part of a rigorously evolved whole they make sense,” says
the former employee. “That is not to say Bridgewater is perfect or that Ray doesn’t
make mistakes—those are actually the things that keep the drive for excellence alive.”

Dalio insists on “radical transparency” at all times, which the ex-employee says
can be disorienting but is necessary for true professional improvement. There are
proprietary iPad apps that let employees rate other employees in something close
to real time, and all meetings are recorded and archived.

Former FBI director James Comey served as Bridgewater’s general counsel
from 2010 to 2013, and once appeared in a corporate video in which he talked
about being challenged after a meeting by an employee many years his junior.

“My initial reaction was What? You, kid, are asking me that question?” Comey said
in the video. “I was deputy attorney general of the United States; I was general
counsel of a huge, huge company. No 25-year-old is going to ask me about my
logic. Then I realized, I’m at Bridgewater.”

The culture doesn’t work for everyone; it has been reported that 25 percent of
new hires leave within 18 months. Still, a job at Bridgewater is considered one
of the best in the business, not least because, as Jeff Macke says, “You can make
a shitload of money there.”

Dalio, like any hedge fund manager worth his salt, won’t divulge the secrets of
his investment strategy. However, he has called Transcendental Meditation, which
he began to explore as a college student after hearing that the Beatles had become
practitioners, “the single most important reason for whatever success I’ve had.”

In a video since removed from a TM-affiliated website, Dalio said, “I notice a
difference from the moment I meditate. I can be stressed, or tired, and I can go
into a meditation and it all just flows off of me. I’ll come out of it refreshed and
centered, and that’s how I’ll feel, and it’ll carry through the day.”

Dalio has donated millions of dollars to the David Lynch Foundation, which
champions the meditation technique (Martin Scorsese and Jerry Seinfeld are also
devotees), and he’ll pay the tuition for any Bridgewater staffer who wants to study it.

“I feel like Ray loved and cared for all of his employees,” the former employee
says. “He was, and I think still is, very generous.”

Underscoring that, in 2010 Dalio sold approximately 20 percent of Bridgewater
to his employees. He has never taken the company public, so as not to water
down its identity. Dalio has also signed the Giving Pledge, promising to give away
a considerable amount of his wealth to charity through the Ray Dalio Foundation.

“We learned that beyond having enough money to help secure the basics—
quality relationships, health, stimulating ideas, etc.—having more money, while
nice, wasn’t all that important,” Dalio and his wife, Barbara, wrote in a statement
announcing their pledge. “We experienced directly what the studies on happiness
how—that once the basics are covered, there is no correlation between how much
money one has and how happy one is—but there is a high correlation between having
meaningful work and meaningful relationships to one’s health and happiness.”

“Ray tried to do things the way that everybody expected him to, and it didn’t
work out,” says O’Grady. “So he started his own company in his living room, and
look where he is now.”