Having a pro-gun president and the Sandy Hook massacre are being blamed for the company’s collapse. 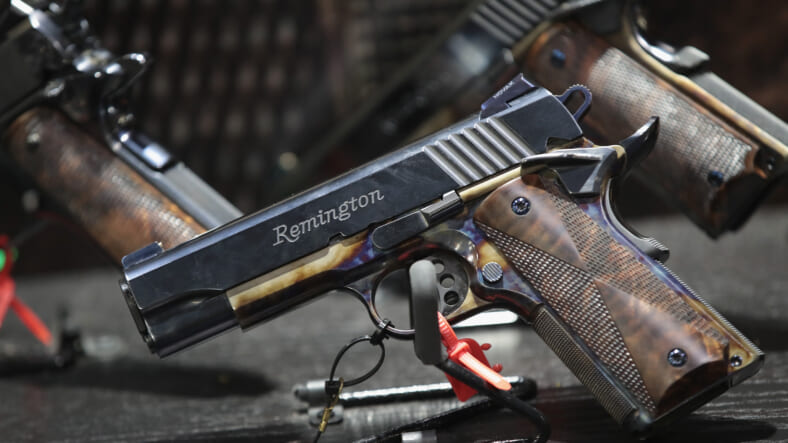 On the same weekend that young people across the world gathered en masse to advocate for stricter gun laws and reduced gun violence, the oldest gunmaker in the U.S. filed for chapter 11 bankruptcy.

The timing was mere coincidence. Remington Arms Co., which burst onto the scene in 1816 when Eliphalet Remington II debuted his flintlock rifle, has been in trouble for years.

The problems may have began in 2012, when 26 teachers and school children were murdered in Newtown, Connecticut with a rifle made by Bushmaster, which is owned by Remington. Parents of some former Sandy Hook Elementary students sued Bushmaster and Remington over the marketing of the gun.

“Here you have this machine that was designed for use by the military being sold to civilians, to untrained civilians, with aggressive military battlefield language,” Mark Barden, whose child was killed at Sandy Hook, told the Guardian in 2016. “And guess what? History has shown that these people who are suicidal, disturbed individuals who are bent on killing large numbers of people – that’s the weapon they choose.”

The lawsuit has continually hit roadblocks, but investors didn’t need a resolution to cut ties to the company. The bad press after Sandy Hook was enough for many to cut ties to Remington.

But that wasn’t enough to kill the company, which, like so many other gun makers, saw sales surge thanks to the unfounded fear that President Obama was going to send the feds to kick down the doors of gun owners and seize their firearms.

President Trump’s election in 2016 ended that far-fetched scenario, as well as the ability of gun manufactures to capitalize on them.

“There is no panic buying of guns because there is clearly no threat of federal government action in response to mass shootings that would restrict or regulate firearms,” Daniel Webster of the Johns Hopkins Center for Gun Policy and Research, told The New York Times last month. “The gun lobby can’t scare their followers into thinking Donald Trump would sign any piece of gun control legislation as they could under an Obama presidency.”

For Remington, the first nine months of Trump’s presidency came with a 27 percent dip in sales. It’s easy to see why. Last year Trump became the first president in three decades to address the National Rifle Association’s annual meeting. “You have a true friend and champion in the White House,” he told the group.

Trump’s not the only one. The NRA maintains deep friendships throughout the GOP, which controls both houses of Congress and has demonstrated in the last six months that massacres like those in Las Vegas and Parkland will spur little action related to gun control.

For gun lovers, this is good news. For gun manufacturers, it stinks. Not just because people aren’t buying, but because this isn’t what companies like Remington prepared for. Like so many others, it expected Hillary Clinton to win the presidency and ramped up gun production in anticipation. Now it’s got tons of guns and not enough firearms enthusiasts willing to buy them.