Researchers Discover Weed Was First Domesticated in China 12,000 Years Ago

The plant was first used in northwest China to create fabric and for medicinal purposes. 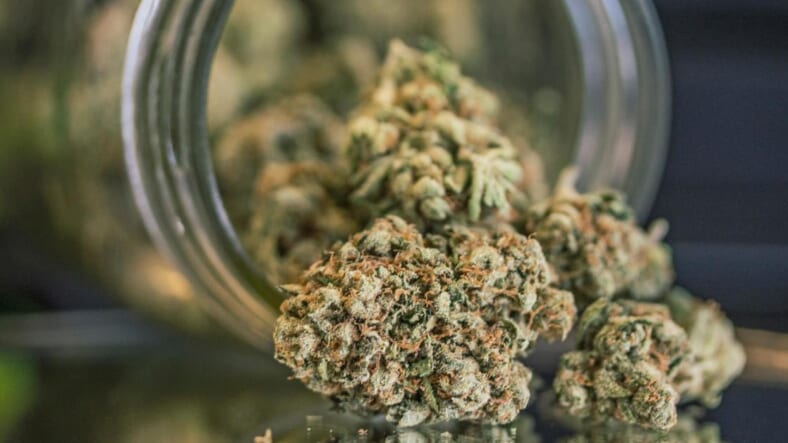 As controversial, consciousness-altering pastimes go, cannabis use is pretty much as old as civilization. Our far-distant ancestors were getting tipsy from the alcohol in fermented fruit long before the first human toked up, but the University of Lausanne found that cannabis was first domesticated in China 12,000 years ago.

Tracking down the sources of prehistoric weed was a collaborative effort that involved scientists in Britain, China, India, Pakistan, Qatar, and the University of Lausanne in Switzerland.

It’s easy to imagine the researchers gathered for a drum circle and some hacky-sack followed by a truckload of Doritos to put together their findings and publish them in Science Advances. And what they found was (jokes aside), pretty fascinating.

The study spanned 110 genomes of cannabis varietals, from plants still found in the wild to hybrids created since weed use began its slow march toward legalized use in the western world. Research revealed that in China alone, cannabis has been in use for thousands of years for a variety of purposes, from practical — fabrics, rope — to recognizably modern medicinal and recreational uses.

According to the report, “Cannabis Sativa was first domesticated in early Neolithic times in East Asia.”

Research also revealed that “all current hemp and drug cultivars diverged from an ancestral gene pool currently represented by feral plants and landraces in China.”

The 12,000-year mark was basically when the cannabis plant was bred into different categories for the first time, with taller, slimmer plants used to make hemp products and shorter, more robust plants used for resin.

The report stated that while there was a long-accepted view that associated “cannabis with a Central Asian center of crop domestication,” the University of Lausanne study’s results were “consistent with a single domestication origin of Cannabis Sativa in East Asia.”

The full report is here, at Science Advances. It’s full of highly technical language so it’s probably a good idea to not use any cannabis until after you’ve read it.