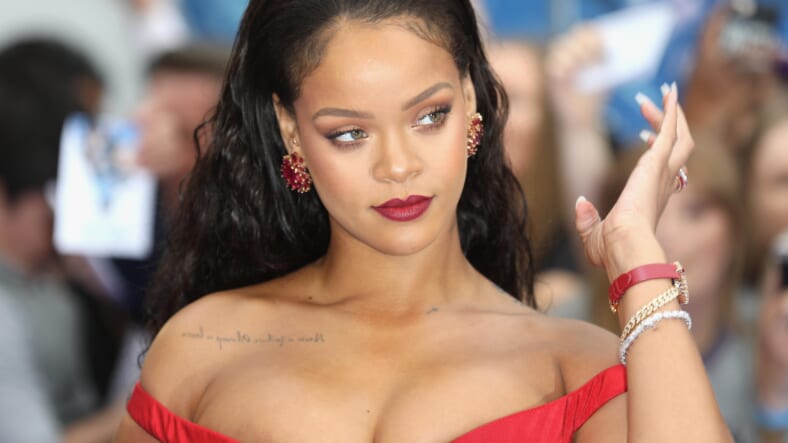 For the second time in a month, Snapchat’s stocks have taken a major hit due to a celebrity’s social media influence.

Is it just me, or is this ad that popped up on my Snapchat extremely tone deaf? Like what were they thinking with this? pic.twitter.com/7kP9RHcgNG

Although “Would You Rather,” the mobile video game advertised, was not produced by Snap, the ad would have had to undergo and pass a review process before publishing. A Snap spokesperson said the majority of video advertising on Snapchat is purchased through a self-serve advertising platform, which is subject to review. Snap’s advertising policy forbids “shocking, sensational, or disrespectful content.”

The Grammy-winning artist ended an abusive relationship with Brown in 2009 after he assaulted her. Given the pair’s tumultuous past, many—including Rihanna—found the ad offensive.

“Now SNAPCHAT I know you already know you ain’t my fav app out there! But I’m just trying to figure out what the point was with this mess!” she posted on Instagram.

“This isn’t about my personal feelings, cause I don’t have much of them … but all the women, children and men that have been victims of [domestic violence] in the past and especially the ones who haven’t made it out yet … you let us down!

“Shame on you. Throw the whole app-oligy away,” she added.

The company took an even bigger $1.3 billion-hit after Kylie Jenner tweeted in late February that she doesn’t open the app anymore.

sooo does anyone else not open Snapchat anymore? Or is it just me… ugh this is so sad.

So two social media posts have cost Snapchat nearly $2 billion. In an email obtained by CNBC, they apologized for running the ad criticized by Rihanna.

“This advertisement is disgusting and never should have appeared on our service. We are so sorry we made the terrible mistake of allowing it through our review process. We are investigating how that happened so that we can make sure it never happens again.”