Syria’s destroyed Palmyra Arch of Triumph has been recreated in Trafalgar Square. 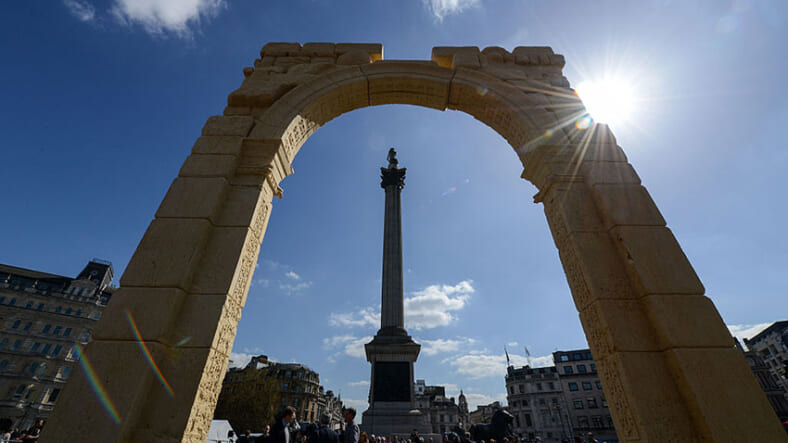 ISIS hasn’t solely waged war on Muslims who don’t share the terrorist state’s view of their religion, or on Christians caught up in their quest to create a “caliphate” in Iraq and Syria.

The army of jihadis has also battled history, destroying museums and previously preserved historical artifacts with glee. Through the miracle of 3-D printing, however, a monument recently revealed in London’s Trafalgar Square may represent technology’s ability to circumvent ISIS’s medieval acts.

In the fall of 2015 ISIS destroyed the nearly 2,000-year-old Palmyra Arch of Triumph in Syria. Built by the Romans when the city was under their rule, the ancient Arch was just one of the many historic sites that made Palmyra a UNESCO World Heritage site. UNESCO called its destruction a “war crime.”

In a way, the U.K.’s Institute of Digital Archaeology has come to the rescue, reported the BBC. By combining photos of the Arch and 3-D tech, the Institute managed to reconstruct a slightly scaled-down version of the artifact using marble quarried in Egypt.

London mayor Boris Johnson unveiled the reconstructed Arch and the BBC reported he said those who assembled to see it were defying “the barbarians” who destroyed the original.

The resurrected Arch will be displayed in various locations throughout the world before it is permanently installed in Palmyra — which was taken back from ISIS in March — in 2017.

Score one for the modern monuments men and women who give a damn.