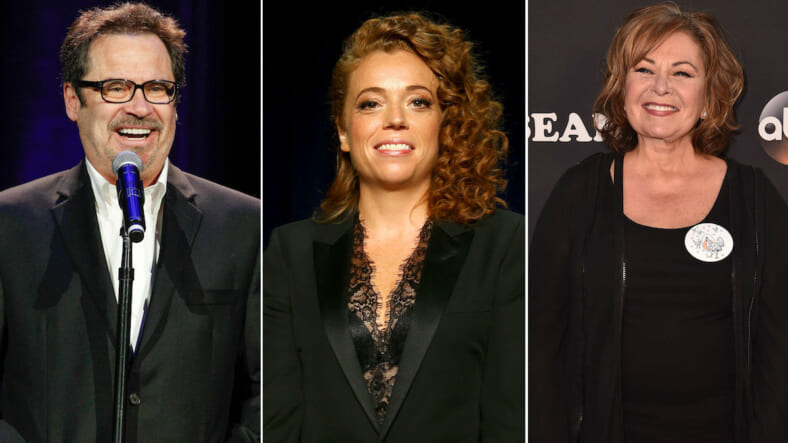 Comedian Michelle Wolf did wonders for her career at this weekend’s White House Correspondent’s Dinner, where she told a lot of jokes that angered a lot of people and earned her more way attention than she’s ever had.

By going in on members of the Trump administration, most notably White House Press Secretary Sarah Huckabee Sanders, Wolf won fans on the left and pissed off many on the right, while earning herself a place alongside Stephen Colbert and other notable comics who’ve made their careers with a controversial stand-up set at the WHCD.

Among those peeved at Wolf are Roseanne Barr and Dennis Miller, two stand up comics who were seasoned pros before Wolf was even born. Both of them offered their thoughts on Wolf’s set.

Roseanne gave some advice to Wolf which she said she learned from bombing 10,000 times herself. Ironically, it was not to punch up at the powerful, a pretty common idea in comedy, but to leave them alone and go after the little guy.

first rule of comedy: NEVER target someone more famous than U who is in the audience. U will lose the entire crowd.

third rule of comedy: the comic has to be the 'asshole' not the audience!

Miller, meanwhile, tried to roast Wolf back, but his joke was so deadpan no one got it.

The joke here appears to be that Wolf is so little-known that Miller will have to spend days researching her before he could find something to rag on her about.

People on Twitter didn’t need nearly as long to rip into him though.

Sassy 8 year old: (to Dennis Miller) Smell ya later, gramps!
Dennis Miller: You can expect my retort in the mail within ten business days!

Monday at dusk—A research assistant delivers a stack of note cards filled with obscure historical allusions to wolves. Miller remains in his custom sweat lodge.
Tuesday dawn—Miller’s butler reads the cards to him in a low monotone as he lies in a sensory deprivation chamber.

QUESTION OF THE DAY:

Who is Dennis Miller?

Roseanne, who’s revived sitcom is dominating primetime TV, was not spared the barbs of Wolf’s defenders, either.

Yeah, but the second rule of comedy is “Roseanne stopped being funny in the 90’s”. https://t.co/QsIK7yEFtE

I thought the first rule of comedy was "Let Laurie Metcalf do the heavy lifting." https://t.co/tyP8Oy2US5

And at least one genius on Twitter combined the two wealthy, aging comics in one tweet and roasted them together.