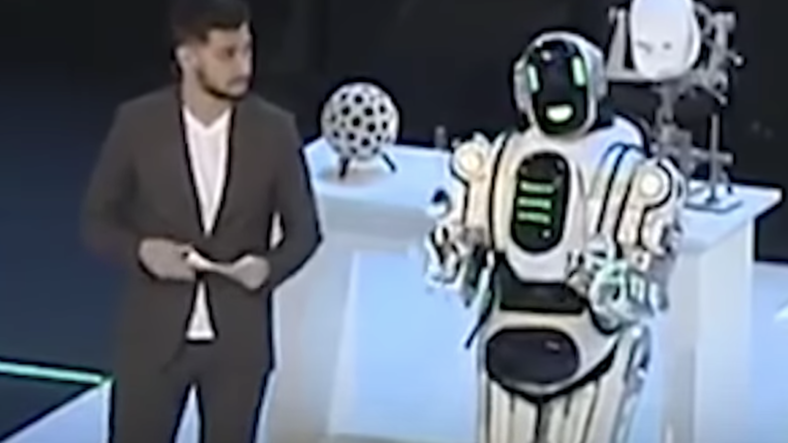 Russia is in the hot seat on the world stage lately. What with alleged meddling in American politics, aggression at the border with Ukraine, and dudes doing dumb dances in robot costumes on state TV, what are we to make of the former USSR?

Where the dancing robot dude is concerned, we should probably just assume folks running propaganda-fueled tech events and aforementioned state TV either aren’t that bright—or they assume their audience is dumb. Watch the Newsweek video above: No one who’s ever seen one of Boston Dynamics’ weird-ass real robots sprinting through the woods would believe that’s a real machine, right?

Apparently they were meant to.

Here’s the lowdown about this hilariously lame fiasco, per the New York Times: “Robot Boris” was introduced at a youth robotics event (see uncomfortable-looking, puzzled Russian teens boogeying in the audience). On taking the stage, he said, “I know mathematics well, but I also want to know how to draw and write music!”

A reporter later said the fortunate teens attending the forum “had the opportunity to see one of the most advanced robots.”

Then, to their everlasting credit, Russian bloggers began calling bullshit, reports the Times:

Some inquisitive Russian bloggers were not convinced, though, wondering how the country’s scientists could produce such an impressive android without showing any earlier results.“Why doesn’t he have a single sensor?” one asked. “Why is there nothing about robot Boris online?”He added: “Why does it look like as though he was made to fit a human being inside?”

Social media posts really sealed the deal as far as making it clear this was a hoax, though.

A loose translation of the tweet reads, “The first day of the “Projectoria” Forum featured 6 author’s lessons from the best teachers in Russia.” Very shiny happy people kind of Russian propaganda tweet, only plenty of people noticed the obvious problem with seeing good ol’ Boris from that angle:

For anyone really in doubt, the inarguable truth was revealed in another photo, which showed an exhausted-looking young man in the Boris costume with his robot head helmet removed.

A perfect metaphor for Putin's Russia – Robot turns out to be man in suit. Boris the robot featured in a state-sponsored event and was seen walking, talking and dancing. More > https://t.co/Ou0dBaxlbn pic.twitter.com/j1NaRayC8C

It’s not like there was a lot of state secrecy around this goof. The suit, “Robot Alyosha” is available online for the equivalent of $3,765 USD. Gusak Labs created Alyosha and other costumes, which they feature on a pretty sweet Instagram account.

The most disappointing thing about this story is that Robot Alyosha didn’t choose to breakdance his ass off like the guy in the red costume above.

Maybe that would’ve been too much of a giveaway.