Another horrifying story from the Weinstein scandal. 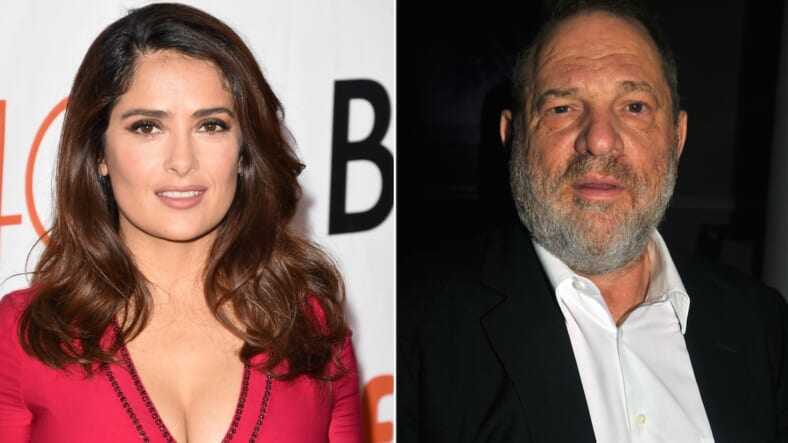 In an essay published in The New York Times, Hayek claims that—while she was never raped by Weinstein—she endured sexual harassment, was emotionally bullied on the set of Frida and was forced to perform a degrading nude scene to get her movie made.

Hayek met Weinstein in the 1990s as she sought backing for her biopic on the Mexican painter Frida Kahlo. He signed Hayek to a multiple-picture deal with his production company Miramax and agreed to produce her film… which created the conditions for years of habitual harassment.

Her accusations mirror those of actresses Ashley Judd, Gwyneth Paltrow and Lupita Nyong’o, among others:

Hayek claims at one point, Weinstein “said the terrifying words, ‘I will kill you, don’t think I can’t.'”

Her torment only worsened on the set of 2002’s Frida, for which Hayek was nominated for an Academy Award for Best Actress. “Ironically, once we started filming, the sexual harassment stopped but the rage escalated,” Hayek wrote.

After Weinstein forced Hayek to orchestrate several rewrites of the script and fill its cast with A-list actors in pre-production, he “berated” her performance and appearance on set… and, in the most distressing point in her essay, threatened to axe the film is she didn’t perform an unscripted nude scene.

“Halfway through shooting, Harvey turned up on set and complained about Frida’s “unibrow.” He insisted that I eliminate the limp and berated my performance. Then he asked everyone in the room to step out except for me. He told me that the only thing I had going for me was my sex appeal and that there was none of that in this movie. So he told me he was going to shut down the film because no one would want to see me in that role.He offered me one option to continue. He would let me finish the film if I agreed to do a sex scene with another woman. And he demanded full-frontal nudity.I had to say yes. By now so many years of my life had gone into this film. We were about five weeks into shooting, and I had convinced so many talented people to participate. How could I let their magnificent work go to waste?I had asked for so many favors, I felt an immense pressure to deliver and a deep sense of gratitude for all those who did believe in me and followed me into this madness. So I agreed to do the senseless scene.I arrived on the set the day we were to shoot the scene that I believed would save the movie. And for the first and last time in my career, I had a nervous breakdown: My body began to shake uncontrollably, my breath was short and I began to cry and cry, unable to stop, as if I were throwing up tears.”

Hayek performed the scene, unable to tell coworkers why she was so distraught. Filming left her so emotionally rattled, she distanced herself from the post-production despite serving as the movie’s producer.

Frida won Weinstein two Oscars, Hayek appeared in the rest of her contracted Miramax films in supporting roles and Hayek believes that she “went to war” and “won” the opportunity to tell Frida Kahlo’s story.

That said, Hayek wonders, “Why do so many of us, as female artists, have to go to war to tell our stories when we have so much to offer? Why do we have to fight tooth and nail to maintain our dignity?”

Read her entire essay on The New York Times.