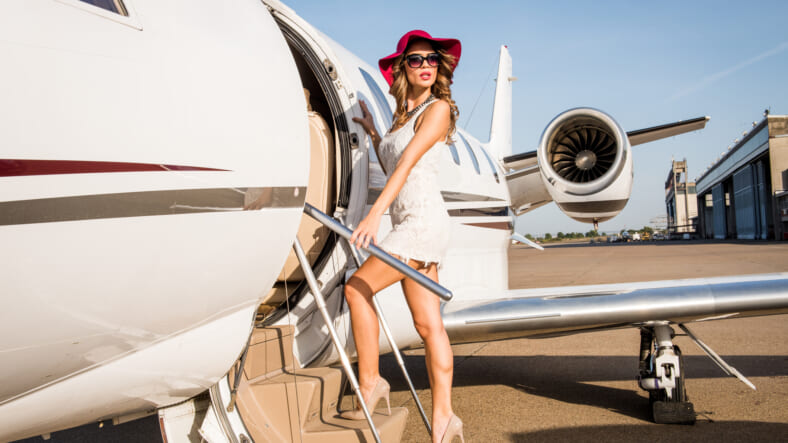 Many women dream of dating and ultimately marrying a millionaire or billionaire and living a luxurious life of diamonds, yachts, and botox. Sadly, there’s usually a slim chance of that ever happening, because life is hard.

However, one Swedish blogger named Anna Bey has actually done it. She has been dating rich guys for years, and says she can teach any woman to bag incredibly wealthy men just like her with her online finishing school, the School of Affluence.

As the name implies, the School of Affluence teaches women the delicate art of affluency, as I like to call it. It shows ladies how they can “transform themselves” and “live up to their potential,” because “a high caliber woman will get a high caliber man,” she told Australian morning show Sunrise.

“Women in high society always have to stay on top of their game in order to keep the man’s interest and also to get the highest caliber of man,” she added.

Unlock the secrets on how to become a woman of the upper-class!

This self-study, online course offers a video-based training program for women who want to become more elegant and live an upscale life.

Students will learn successful strategies on how to enter the high-society, transform themselves to classy women and establish connections that will take their life to the level of the elite.

Plus, Bey says her program gives women the chance to never work a day in their privileged lives. “I don’t think (working) should be forced upon women in high society,” she explained. “I don’t think women should be judged if they’re not working.”

Honestly, I don’t think work is ever forced upon wealthy women. One look at shows like The Real Housewives and we see that all they do is drink rose wine and fight with each other over absolutely nothing.

So, just how does one go about becoming an affluent woman? According to Bey, all it takes is completely changing yourself – both outer appearance and behavior.

To land her boyfriend, Bey apparently lost 33 pounds, got a nose job, and got fillers injected into her lips, cheeks, and chin. In essence, she bought herself a new face that rich men would notice. Simple.

It’s what’s on the inside that counts, we’ve all heard countless times…but not when you’re trying to land a billionaire, I suppose.

“I’m totally pro-plastic surgery, if it’s going to improve your life quality, which it might,” she told The Times. “It can help you attract a higher quality of partner.”

As a side note, I would like to add that minimal and expertly done plastic surgery totally can boost self-confidence in many people, and confidence is sexy. But a pair of rock hard silicone foobies and lips that look like PVC pipes? No.

“I don’t think everybody has to do this. I’m speaking to a particular type of woman who wants to upgrade her lifestyle.”

For example, Bey’s “life upgrade” landed her a dude who was so rich that “it was like being in a movie: there were always bodyguards; he’d give you cash in a bag and say, ‘Hey, go shopping.’”

That sounds great, but I’d like to take a moment to note how sketch the “cash in a bag” part sounds. Did her “extremely rich guy” not have a money launderer? Was it a plastic Walmart bag? So many questions.

Speaking with Maxim, Bey says she got her first taste of luxury when she was a teenager. “I met a rich man when I was 19 (he was 22) and once you try the good life, it’s hard to go back.”

And now, Bey is dating a rich banker, and says an average day for her consists of going to the “gym, work, beauty treatments and time for boyfriend and friends/family. Pretty standard!”

“Standard” is a loose word, but okay.

Lastly, her number one tip for any women who wants to date a man with a fat wallet? “Be classy and always stay on top of your game. Be educated, refined in your behavior and make efforts with your looks.

“Be fun, be interesting, be well-read…that will make you an interesting person and not just a pretty face to look at.”