Kingpin tells actor, “I never thought of hurting anyone.” 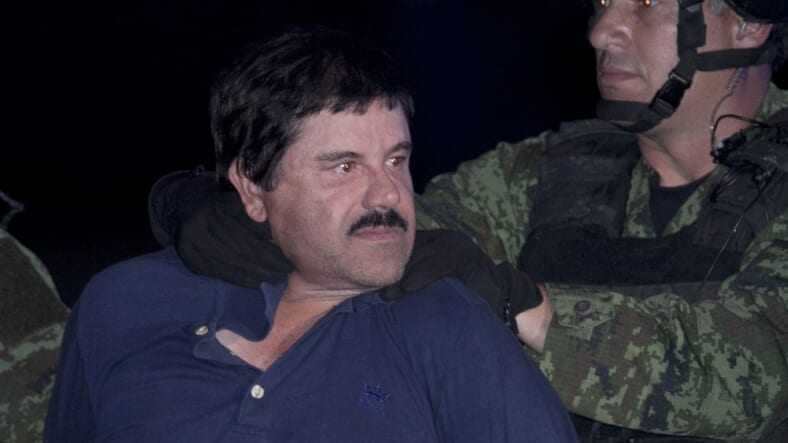 Writing at length in Rolling Stone, actor and activist Sean Penn told the tale of how he achieved one of journalism’s all-time great “gets”: meeting and interviewing Joaquin “El Chapo” Guzman while the drug lord was on the run. Unfortunately for them, the outcome of Penn’s encounter may have been bad for El Chapo and perhaps for Penn as well.

More about that later.

El Chapo speaks: Sean Penn recounts his secret visit with the most wanted man in the world https://t.co/F4x6x8ANBd pic.twitter.com/8wDb2I6Xkt

Penn had a nail-biting experience just arranging the interview while remaining aware he was almost certainly under surveillance. “At 55 years old,” the actor wrote, “I’ve never learned to use a laptop.” That was a problem, because Penn described arranging his trip to meet El Chapo—achieved in coordination with Mexican film and TV star Kate del Castillo, who’d made contact with the drug lord after addressing him over social media—as a “a clandestine horror show.” At least it was for Penn, who admitted he was “the single most technologically illiterate man left standing.”

Once Sean Penn finally met the man with Mexico’s biggest target on his back, Penn found El Chapo “wearing a casual patterned silk shirt, pressed black jeans” and looking “remarkably well-groomed and healthy for a man on the run.”

Penn and Kate del Castillo spent seven hours with El Chapo in a jungle clearing. Del Castillo and some “security operators” who’d accompanied them translated the kingpin’s conversation for the actor. Penn didn’t record the encounter but he gleaned plenty from sharing tequila with the man he’d later call “a humble, rural Mexican” in his 11,000 word piece. Below are five fascinating bits culled from Penn’s account—plus a touching bonus item.

El Chapo doesn’t want to “be portrayed as a nun”—a do-gooder. And Penn perceived what he termed a “doubtlessness” in Guzman’s face. However, Guzman’s sons were also in attendance, leading Penn to observe that “[this] simple man from a simple place, surrounded by the simple affections of his sons to their father” didn’t strike him “as the big bad wolf of lore.” El Chapo’s presence, wrote Penn, conjured “questions of cultural complexity and context, of survivalists and capitalists, farmers and technocrats, clever entrepreneurs of every ilk, some say silver, and others lead.”

El Chapo isn’t a teetotaler but says he rarely drinks and doesn’t do drugs. “I don’t usually drink,” the man who runs a far-reaching international drug operation told Sean Penn, “but I want to drink with you.” He tossed back a tequila while speaking with the actor. In answer to a later question, El Chapo told Penn he hadn’t done drugs “in the last 20 years.”

In spite of being one of Mexico’s most wanted, El Chapo seemed unaware of his renown north of the border. He asked Sean Penn if “many” in the U.S. were aware of him. When the actor told him of his high profile in America, Guzman appeared to “delight in the absurdity of this,” and he and his crew shared “a chuckle.” This prompted reflection on Penn’s part and he wrote of looking up and wondering “how funny it would be if there were a weaponized drone above us.”

Joaquin Guzman makes no bones about his business. El Chapo asked Penn what he was being paid to do the article. Penn, in a blow to journalists everywhere, told Guzman he didn’t take money for journalism. El Chapo seemed shocked. It prompted a frank admission—unlike some gangsters, Guzman has never bothered with having seemingly “straight” business fronts. “I supply more heroin, methamphetamine, cocaine and marijuana than anybody else in the world. I have a fleet of submarines, airplanes, trucks and boats.”

El Chapo seemed oddly noncomittal about Donald Trump. Penn’s account is interesting on many levels in spite of it rightfully having been drubbed for being—to put it nicely—a strange and frequently unreadable piece of writing. One fascinating moment was when Penn wrote of referencing GOP front-runner and billionaire Donald Trump. El Chapo has allegedly offered a $100 million for Trump’s assassination. According to Penn, El Chapo smiled at mentioning Trump and “ironically” said, “Ah! Mi amigo!”

A fart is the central element in a “moment” shared by El Chapo and Sean Penn. As Penn tells the story, Joaquin Guzman is a man who understands the failures of the human body:

Chapo puts his arm over my shoulder and renews his request that I see him in eight days. “I’ll be saying goodbye now,” he says. At this moment, I expel a minor traveler’s flatulence (sorry), and with it, I experience the same chivalry he’d offered when putting Kate to bed, as he pretends not to notice. We escape its subtle brume, and I join my colleagues inside the bungalow.

Penn was unable to re-connect with Guzman eight days later. Eventually, after badgering Kate del Castillo to the point of her calling him a “pushy motherfucker,” Penn managed to get video of El Chapo answering several written questions.

This may have been the least interesting part of the account, as El Chapo ended up sounding like his own best PR man. He portrayed himself (his answers were translated from Spanish) as the child of a “very humble family,” who learned that the “only way to have money to buy food, to survive, is to grow poppy, marijuana,” so El Chapo “began to grow it, to cultivate it and to sell it.”

El Chapo also admitted that it is “a reality that drugs destroy.” Asked if he was a violent person, he said no, but violence is a part of drug trafficking “because already some people already grow up with problems, and there is some envy and they have information against someone else. That is what creates violence.”

Joaquin Guzman was arrested on January 8, 2016. Since his arrest it has become apparent for the first time that there’s a good chance he will be extradited to the United States. CNN reported a statement from Mexico’s Attorney General, who said that since “Guzman Loera has been recaptured, the beginning of the extradition proceedings should begin.”

As we hinted above, Sean Penn and Kate del Castillo probably didn’t do El Chapo—who was supposedly seeking connections to make a movie about his life—or themselves any favors. The Associated Press reported that an anonymous Mexican official “said it was the Penn interview that led authorities to Guzman in a rural part of Durango state in October.” The presence of a woman and children stopped the authorities from raiding the scene.

If that wasn’t enough to have anyone with a little sense worried that the chief of an army of narcos with worldwide reach might blame them for his arrest, Mexican authorities would also like to talk to both Penn and del Castillo about their adventures in journalism.

While impeded by Sean Penn’s purple prose—there are moments when it’s hard to tell if he’s being funny or if he had no idea how his words might read to others—the actor’s encounter with El Chapo makes for riveting reading, even if you read between the lines. For example, Penn clearly understood just how much danger he was in, yet one account of his paranoia manifesting is—perhaps unintentionally—also laugh-out-loud funny:

I throw my satchel into the open back of one of the SUVs, and lumber over to the tree line to take a piss. Dick in hand, I do consider it among my body parts vulnerable to the knives of irrational narco types, and take a fond last look, before tucking it back into my pants.

Journalists can debate the ethics of Penn’s interview and prose stylists will shudder at his way with a sentence, but we have to admit we’re glad Sean Penn apparently got out with both his junk and an amazing story intact.