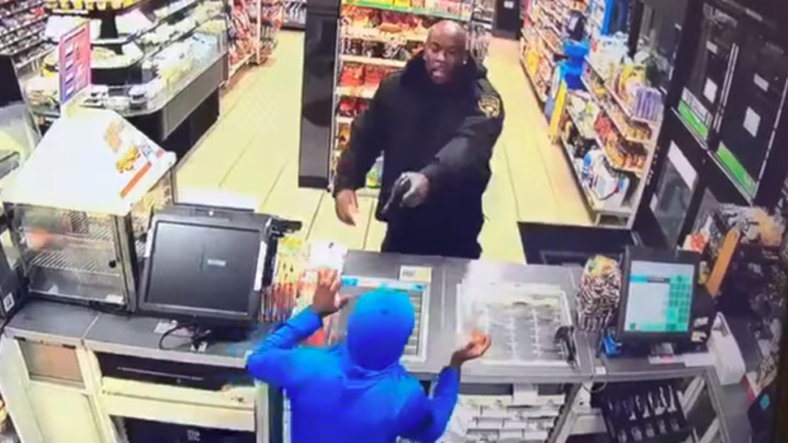 According to the video’s YouTube description, it all went down at a 7-Eleven in Hamilton, New Jersey. At the beginning of the 90-second clip, two shady individuals can be seen wandering though the convenience store.

The man wearing a blue hoodie then hops the counter and brandishes what appears to be a pistol.

Shortly after his accomplice begins working the register, a security guard comes barreling through the door, guns blazing.

He hits the man in blue and walks straight up to the second thief, who is now cowering behind the counter and shouting that their gun is fake. Unfortunately for him, this security guard doesn’t fuck around.

He shoots him too before delivering a badass line straight out of a Dirty Harry movie.

“Mine’s real. Get up, put your hands behind your back.”

“Am I shot?” one of the now-bloodied robbers asks, clearly in shock.

“Oh, fuck yeah,” the guard responds. “Put your hands behind your back. I don’t give a flying fuck.”

As they all wait for the authorities to arrive, the guard delivers his second epic line.

“Get on the ground. I don’t give a fuck if you die here right now.”

That’s COLD. Whoever this fearless hero is, he deserves a medal—and maybe a movie role.