To be fair, he does look better in the selfie. 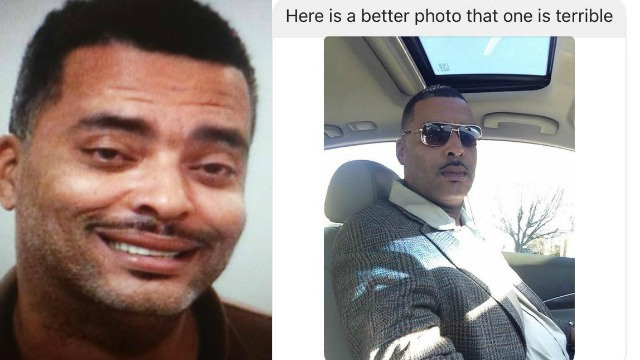 Anyone who’s taken a hundred selfies before finally nailing the perfect portrait will feel Donald “Chip” Pugh’s pain.The 45-year-old fugitive is currently wanted in the state of Ohio for failing to appear in court for a drunk-driving charge and as a person of interest in arson and vandalism cases. Despite his dire legal situation, the thing that’s keeping Pugh up at night is his ugly mugshot, which he says makes him look like a “Thundercat or something, like James Brown on the run.”

While evading law enforcement officers, Pugh sent the Lima Police Department a selfie to use in place of his old mugshot. “Here is a better photo that one is terrible,” Pugh wrote when he sent police the new picture, according to a Lima PD Facebook post on Thursday.

This photo was sent to us by Mr. Pugh himself. We thank him for being helpful, but now we would appreciate it if he would come speak to us at the LPD about his charges.

This is hilarious, sure, but Pugh’s vanity may be his undoing. Lt. Andy Green of the Lima Police Department told the Huffington Post that “(Pugh’s) drawing more attention to himself, which is going to make it easier for us to locate him, because the more attention that this post garners, the more people are going to see it, the more tips are going to come in about this guy.”

In a radio interview with 104.9 FM The Eagle, Pugh tried to explain away his absurd behavior. “When I was a little kid, my grandmother told me a bedtime story. My hero was this character, who used to say, ‘Run, run, fast as you can. You can’t catch me, I’m the gingerbread man.’”

Hopefully Pugh will like the new mugshot he gets after he’s arrested and booked for failure to appear in court. It might look a bit familiar: