‘Snowballs’ Is The Cooling Underwear You Never Knew You Needed 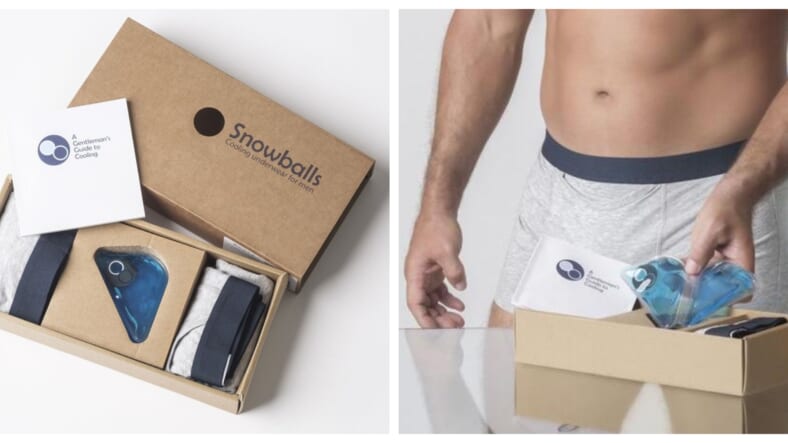 Summer is a decidedly, uh, swampy time for many men and the summer of 2019 has been especially hot and humid throughout most of the northern hemisphere. Dress loose and in light fabrics all you want, eventually the heat hits you in the crotch.

It’s a uniquely male problem and one underwear company has the solution to that and more. Snowballs basically wants to ice your ‘nads back into the comfort—and fertility—zone.

From The Sun by way of the New York Post:

Over on Amazon, a brand called Snowballs Underwear is selling “scientifically-backed cooling underwear”.The underwear comes with ice packs — dubbed “SnowWedges” — that men are able to put in the freezer before popping into a pouch that sits over the groin.According to SnowBalls, the “SnowWedges” are ready for use after less than an hour in the freezer. After that, they’ll keep him cool for 30 minutes.

Being able to walk around with your ‘nads air-conditioned without risking indecent exposure is pretty appealing. And Snowballs claims their product can do more than just frost the funk away from your nether regions.

In fact, the company’s primary motivation behind this innovation was… family.

From the Snowballs “About” page:

Male infertility accounts for roughly 40% of all infertility, but it’s still tough to sound cool when talking about it. That’s why we loved the name we had dreamed up for our still-imaginary product: Snowballs! Some thought it was inappropriate, but for us it was just the punch line of the story we were dying to tell. You see, we had both been through the “fertility factory” with our wives, losing our money and our minds until we began to look more closely at the actual causes of infertility…and became obsessed by heat.

What’s the deal with heat and problems with your little swimmers? According to DontCookYourBalls.com (they sell a sperm count tracker), “If sperm are exposed to elevated temperatures, they begin to die.” That reduces the sperm’s ability to swim, basically. And “If the exposure to heat is prolonged, it can affect sperm production processes, causing the body to produce fewer sperm, many of which may be abnormally shaped.”

That’s a pretty good argument for icing up your boys whenever possible. Unless, that is, you don’t want kids, in which case, let ’em fry.

If you’re really ready to pop some ice pads in your shorts and go, get frosty with Snowballs today.