This is just cruel. 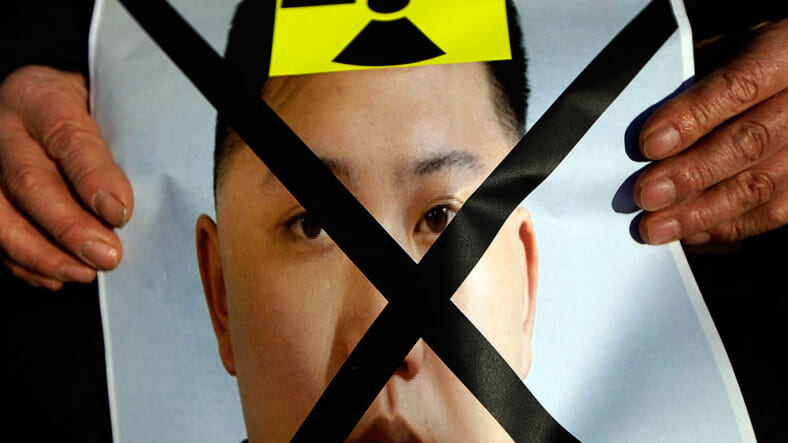 After North Korea rattled the region with another nuclear test on Tuesday, the government of South Korea took measures to ensure its secretive neighbor knows exactly how it feels about what it see as another act of aggression. To that end, the military is retaliating against its northern neighbors with a sinister weapon: pop music.South Korea has again revved up its massive banks of loudspeakers at the border with the North, and Bloomberg reports that this time they’re blasting K-pop—a peculiar, insane form of South Korean pop music.

This may seem strange, but it’s not unheard of. After all, the U.S. used music to “induce sleep deprivation, ‘prolong capture shock,’ disorient detainees during interrogations—and also drown out screams” when dealing with prisoners in Iraq, as Mother Jones reported in 2008. Among the songs the military used: AC/DC’s “Shoot to Thrill,” Bee Gee’s “Stayin’ Alive,’ and the theme song to Barney & Friends. While aural torture with hard rock or metal seems like a torment you’re more likely to experience during a fraternity hazing ritual than on the battlefield, using K-pop seems like an act of cruelty worthy of a trial at The Hague. K-pop is a mash-up various musical styles, including pop music, metal, hip-hop and rhythm & blues. It sounds innocent enough, but K-pop can get pretty strange.

It’s music like this, “Ppappa Pierrot” by K-pop star Elizabeth, that’s being blasted at shattering volumes over the heavily secured Demilitarized Zone (DMZ) that separates the Koreas.

Of course, that’s not all that’s coming from South Korea’s speakers—commanders have to consider the sanity of the soldiers manning the equipment. Bloomberg reported that the massive sound system also broadcasts “recordings of casual conversations to discussions about the importance of human rights and the lives of South Korea’s middle class.”

Still, when musical selections fired into North Korean eardrums reportedly include such classics as “Bang Bang Bang” by K-pop boy band Big Bang, well, it almost seems a cruel thing to do to innocent residents of the Hermit Kingdom who are just trying to scratch out some kind of life within earshot of the border.