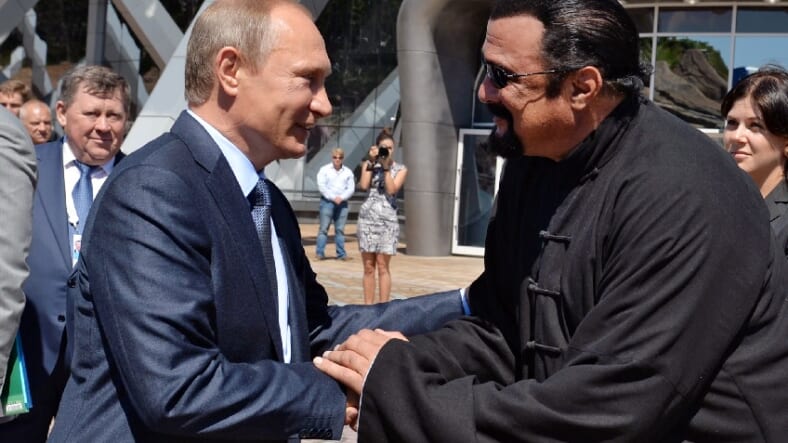 At 64 years old, Steven Seagal is likely looking forward to a little rest and relaxation after his years on the big screen as an action star. Now he can comfortably do so in the arms of Mother Russia.

Vladimir Putin confirmed Seagal’s Russian citizenship Thursday, reports USA Today. It’s not a surprising development; as the newspaper notes, Seagal has been an outspoken fan of and even friend to Putin for some time, saying that the Russian Federation president is “one of the greatest world leaders” and attending martial arts matches alongside the former KGB agent and judo master.

The pension angle for the Seagal story. Seagal is entitled to a pension of 5,000 rubles ($78) when he reaches retirement age next year. https://t.co/nIgsTyQO0r

While Seagal hadn’t made any public comment about the honor as of early Friday, he would stand to benefit from the arrangement in numerous ways, including drawing a Russian pension once he became that nation’s official retirement age.

USA Today notes that stars from other countries taking up Russian residence isn’t that unusual:

If Seagal were to accept Russian citizenship, he wouldn’t be hurting for expatriate company: French actor Gérard Depardieu went into tax exile there in 2013 and American boxer Roy Jones Jr. made a personal request to Putin for dual citizenship in 2015 in order to ease his frequent business trips there — and got it.

The allure for stars is easy to see. Russia is likely much more affordable for someone who has made their money in western dollars and the climate in regions like the recently re-acquired Crimea is excellent. Seagal himself is also clearly a fan of many elements of Russian culture.

We hope the Under Siege star did this exact set of dance moves when he heard the good news from the Kremlin. Even in wintry Russia, life can be fun.