This Man Closed a Texas Interstate for His Ridiculous Stunt Proposal 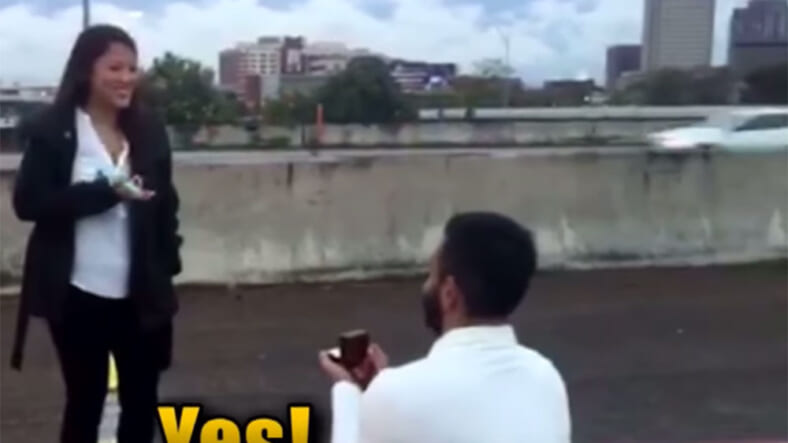 Ever since the first elaborately staged proposal video went viral, guys—and it always seems to be guys—have been trying to find new and original ways to declare their forever love. And get it on video, of course. Vidal Valladares Navas of Houston, Texas, may have taken it too far, however. Houston police are pressing charges against him for blocking an entire interstate highway for his dream proposal.

The recently-divorced Valladares went for his grand and potentially fatal gesture on Tuesday when he gathered enough camera-wielding pals to stop traffic on I-45, one of Houston’s busiest freeways. As Houston TV station KHOU reported, an “off-duty officer happened to see the proposal” and that officer’s account was enough for police to charge Valladares with the class B misdemeanor of obstructing a highway. Smooth.

While the groom-to-be was apologetic in the video published by Inside Edition — he just wanted that awesome view, sorry about your delayed commute! — Houstonians who commented for various local reports ranged from those who found it a touching gesture to folks who were much more practical, like resident Desmond Banks. “Not in the middle of the highway, anywhere but there,” Banks told to Click2Houston, “It’s dangerous. Too many cars out on 45.”

We’re all for romance, but don’t such dramatic, stunt proposals sort of seem like they’re more about someone showing off how romantic they can be? And how romantic is it, really, to shut down a major artery where one rogue tractor trailer is all that’s needed to turn the romance into a horrible tragedy?

Whatever, you do you, Vidal Valladares Navas. Good luck, and remember that future photo ops shouldn’t shut down travel for a major American city.