Oh, Cluck No! Subway ‘Chicken’ Sandwich Is Allegedly Made of Only 50% Chicken 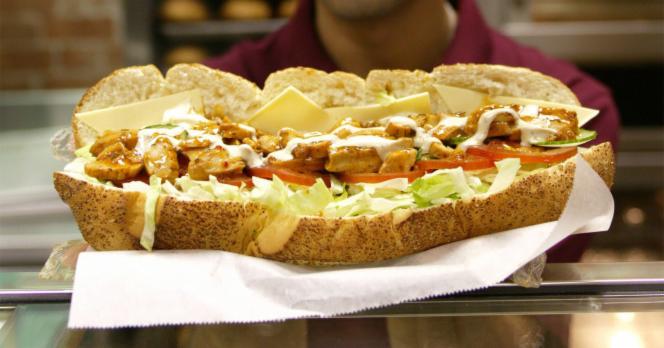 Subway’s claim that their chicken is “100 percent white meat” is currently under fire as a result of findings by Canadian researchers.

The restaurant’s oven-roasted chicken contains a mere 53.6 percent chicken, according to the DNA tests, and its chicken strips contain about 42.8 percent, the investigation by the Canadian news outlet CBC Marketplace found.

Researchers also tested chicken from other fast food joints and found that unlike Subway’s sad soy-chicken concoction, their poultry items contained much higher percentages of chicken DNA. According to the Post:

“The accusations made by CBC Marketplace about the content of our chicken are absolutely false and misleading,” a company spokesman said in an email to CBC. “Our chicken is 100 percent white meat with seasonings, marinated and delivered to our stores as a finished, cooked product.”

Subway went on to demand that the CBC double back on its own findings. “We have advised them of our strong objections. We do not know how they produced such unreliable and factually incorrect data, but we are insisting on a full retraction.”

Unless the CBC has a vendetta against the fast food sandwich chain and deliberately put out a libelous statement, common sense dictates they would have had to have royally fucked up their research to be that far off.

After the findings were published, Subway also said “Our chicken strips and oven roasted chicken contain 1 percent or less of soy protein. We use this ingredient in these products as a means to help stabilize the texture and moisture.”

Here’s an update we received from Subway:

Test results from laboratories in Canada and the U.S. clearly show that the Canadian chicken products tested had only trace amounts of soy, contradicting the accusations made during the broadcast of CBC Marketplace.

Subway representatives immediately contacted the program and the lab that conducted the tests to inquire about the methodology and the testing process. The program and the lab declined to engage with Subway except to share the results. In response, Subway sent samples of the Canadian products that Marketplace claimed contained 50% soy protein to Maxxam Analytics in Canada and Elisa Technologies, Inc., in Florida

The results from both labs found soy protein below 10 ppm, or less than 1%, in all tested samples. These findings are consistent with the low levels of soy protein that we add with the spices and marinade to help keep the products moist and flavorful.

“The stunningly flawed test by Marketplace is a tremendous disservice to our customers. The safety, quality and integrity of our food is the foundation of our business. That’s why we took extra caution to test and retest the chicken. Our customers can have confidence in our food. The allegation that our chicken is only 50% chicken is 100% wrong,” said SUBWAY President and CEO Suzanne Greco.

Dave Theno, Subway’s Chief of Food Safety & Quality, said, ” Our chicken is 100% white meat with seasonings, marinated, cooked and delivered to our restaurants. The chicken has no artificial colors, flavors or preservatives. Through years of testing, we’ve never seen results like the program claimed.”

Subway has shared the results of the independent tests with Marketplace and the lab that conducted the flawed test. The company is demanding a retraction and apology.