“Don’t do what I did, you might not have the same outcome.” 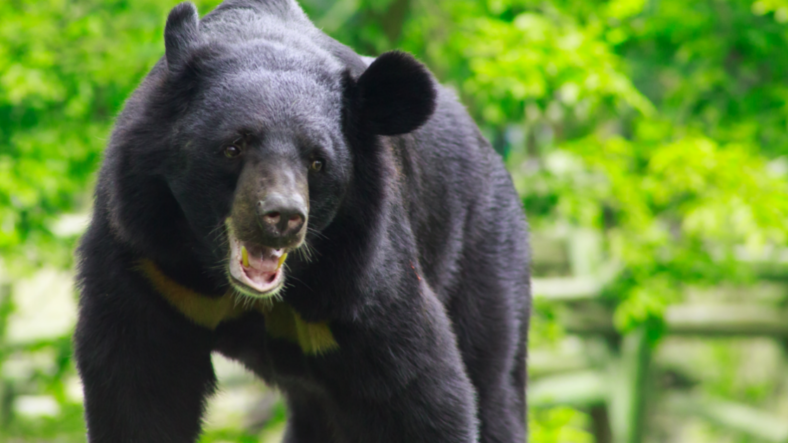 Would you fight off a bear to save your kids? Your pets? A teen girl living in the San Gabriel Valley in California didn’t even stop to think about it — as seen in the viral video above,

The surveillance footage shows the moment just after 2:30 p.m. when a bear and two cubs walked along a brick wall in the teen’s backyard in Bradbury. Three of the family’s dogs started barking at them. At the time, the family was gardening at another end of the yard when they heard the barking. Videos shows the bear swat at the dogs a few times before the teen runs up.On Facebook, her mother, Citlally Morinico, called it “one of the scariest moments in life.”

No kidding. As for Citlally Morinico’s daughter Hailey, she jumped into action before she really thought about what she was doing, that much is clear.

She heard the dogs freaking out and went to see what was up. “I see the bear,” KTLA quoted her as saying, “it’s grabbing my dog, Valentina, and I have to run over there. She’s a baby.”

Hailey continued on to say “the first thing I think to do is push the bear. And somehow it worked.”

The bear is seen getting the hell out of dodge immediately afterward because let’s face it, teen girls are terrifying.

Hailey became a social media hero (and sometimes a punchline) when the video justifiably went viral. The internet loves bears but it loves dogs even more.

I am very impressed that the girl who fought a bear was only seventeen, but then I remembered the human brain isn’t fully developed until 25.

Hailey was reacting on such an instinctive level she also later said she didn’t really register that she was committing a remarkable act of bravery, given that bears will end you in nothing flat, and mama bears with cubs in tow are even more likely to mix it up with humans — for the same reason, really, that Hailey Morinico rushed to her dogs’ rescue.

Still, she told KTLA she doesn’t recommend her course of action. “Do not push bears. Don’t do what I did, you might not have the same outcome.”

Duly noted, Hailey. The internet and dogs everywhere thank you for your courage.