“If Jesus was physically on the earth today, he wouldn’t be riding a donkey.” 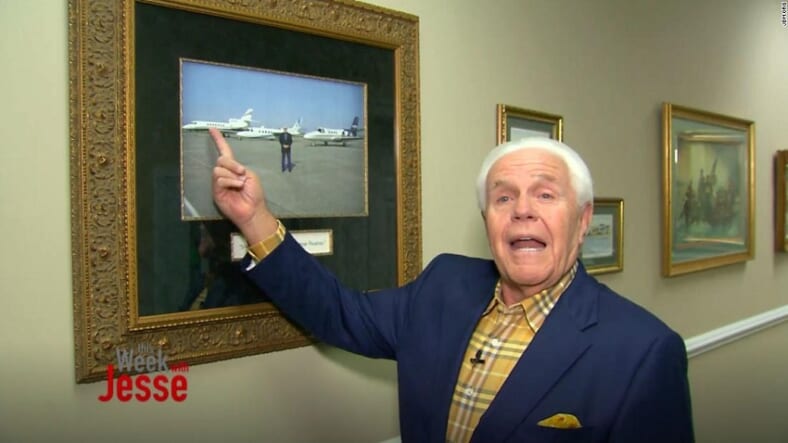 Louisiana-based televangelist Jesse Duplantis believes he is a man of God, and men in his position are always seeking a closer walk with the Lord. That’s why Duplantis feels just fine asking his followers to pony up a cool $54 million so he can purchase the very sweet Dassault Falcon 7X private jet.

To those who aren’t slain in the Spirit each Sunday by Duplantis’s interpretation of the Word, it’s hard to understand his need for luxury accommodations when spreading the gospel worldwide.

It’s especially hard to understand when one learns the good preacher already owns three private planes. He could name them Father, Son, and Holy Ghost and it would make total sense, but with a fourth plane he’d probably have to start digging into great biblical names like Noah and Nimrod.

Anyway, CNN reports on Duplantis’s stated rationale for seeking such a luxurious sky chariot—a rationale taken from a conversation with Jesus Himself:

“It was one of the greatest statements the Lord ever told me, he said, ‘Jesse do you want to come up where I’m at?'” the minister says. “‘I want you to bleed me for a Falcon 7X.'”By “bleed,” Duplantis — er, Jesus — apparently meant “ask for donations.”Duplantis goes on to tell his followers that jets, especially nice ones with good fuel efficiency, allow him and his ministries to reach more people around the world. And no, it wouldn’t technically be his, it would be the ministry’s.

His reasoning seems sound enough when you get a look at the Falcon 7X, which looks like a damn sweet ride, inside and out.

Duplantis says that all a new Falcon 7X will do is allow him to “touch people.”

To bring it home, Duplantis concludes that “if Jesus was physically on the earth today, he wouldn’t be riding a donkey.”

To understand all this you need to know that Duplantis is a believer in “prosperity gospel.” According to Christianity Today, it is an “aberrant theology that teaches God rewards faith—and hefty tithing—with financial blessings, the prosperity gospel was closely associated with prominent 1980s televangelists Jimmy Swaggart and Jim and Tammy Bakker, and is part and parcel of many of today’s charismatic movements in the Global South.”

CNN reports that past televangelists and believers in prosperity gospel who have also requested millions in the name of purchasing anointed aircraft include Kenneth Copeland, who bought his jet from Tyler Perry, and Creflo Dollar—though Dollar’s plea was met with much more overt criticism than Copeland’s.

Duplantis and fellow televangelists have a wide, wide reach. They receive plenty of donations—okay, tithes—from their home congregations in addition to television viewers from all over the world. The money will come.

Regardless of how he obtains the means to eventually mount his Falcon and ride, Duplantis will definitely say it was God’s will, in the end.