This Footage Of New York’s Deadly Crane Collapse Is Terrifying 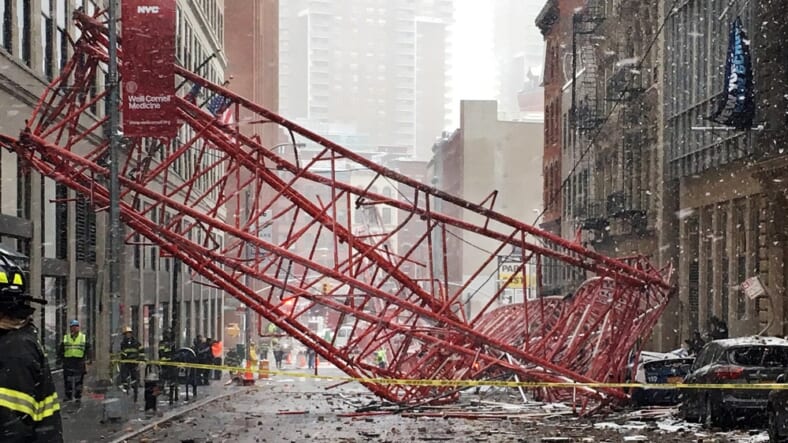 A massive crane collapsed in the TriBeCa section of Manhattan Friday morning, killing one and injuring three others. The moment it swayed then made its deadly plunge into the street was captured in a video given to NBC New York by Glenn Zito.

The 15-story crane was in the process of being lowered to the ground due to gusty winds when the collapse occurred, according to NBC. Its collapse had unseen impacts as well:

The crane crashed down so hard that it disrupted underground infrastructure, Con Edison spokesman Alfonso Quiroz said. The utility told NBC 4 New York that they got a gas reading at an address on Worth Street and has shut down gas mains in the area. Several buildings have been evacuated and authorities are looking to secure four nearby buildings.

One witness described the scene following the collapse as “surreal” to NBC New York. “It was like a war zone when it first happened,” said NYPD Sergeant’s Benevolent Association VP Bob Ganley.

One Instagram user uploaded video of the aftermath made on the ground, in which a completely crushed vehicle could be seen under the crumpled boom.

🎥- @rhdjonwrd | not a good day in NYC.. I wasn't going to post this due to having some respect for the company and those who are involved and injured but it's literally all over everywhere I don't think there's a person who hasn't seen it yet.. | #crane #cranes #nyc #liebherr #cranecollapse

New York mayor Bill De Blasio told the NBC affiliate it would “certainly take several days” to “get things back to normal in these immediate blocks.”