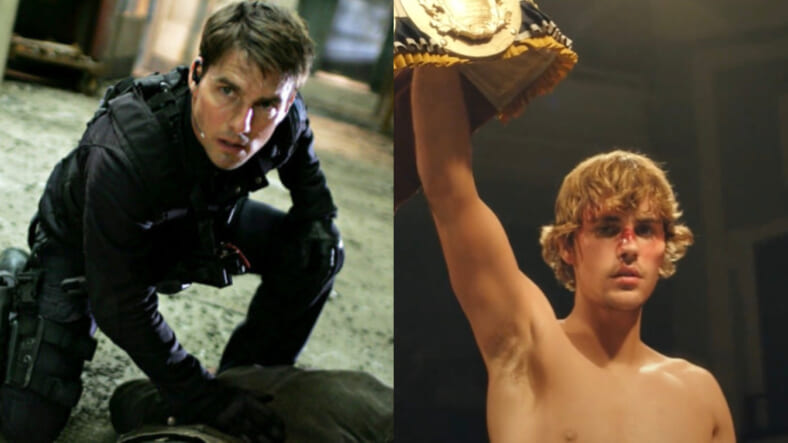 In the video for his song “Anyone,” released on New Year’s Eve, Justin Bieber plays a small-town fighter who is going for a Rocky-style victory. Biebs had to get in shape for the shoot and he must be feeling pretty good about it because he posted a still from the video on Instagram with the caption, “Tom Cruise is toast.”

Reminder: In 2019 (a million years ago in internet time) Justin Bieber inexplicably called Cruise out, challenging him to a cage match for the UFC, tagging the conference president Dana White in his tweet.

It’s easy to laugh but hey, Bieber has two inches of height and reach on Cruise and he’s young enough to be the action star’s son. While Cruise is a formidable guy even as he nears 60, it might be a decent match.

I wanna challenge Tom Cruise to fight in the octagon. Tom if you dont take this fight your scared and you will never live it down. Who is willing to put on the fight? @danawhite ?

Still, Bieber backed off that 2019 challenge, stating that Cruise was simply on his mind at the time, and it “was just a random tweet.”

“I do that stuff sometimes,” he explained.

It might not be so easy to back out this time, since Dwayne “The Rock” Johnson weighed in on Bieber’s “Toast” post with a Rocky reference, writing, “‘You’re gonna eat lightning and crap thunder’ go get em bro.”

It makes you wonder what Johnson might have against Cruise—or Bieber, for that matter, since while the singer has youth and a little size on his side, it’s hard to believe Tom Cruise couldn’t at least do some real damage to him in a legit MMA match. “Old man strength” is real and Cruise stays in top shape. Some bookmakers had him winning the first time Bieber called him out.

Who knows what might happen now? Chances are nothing—Tom Cruise might see it as a bid for attention not worth his trouble if he notices at all.

Still, 2020 taught us all that anything can happen, no matter how goofy or crazy-sounding. Set your betting money aside for this one, just in case.