As If the ‘Tide Pod Challenge’ Wasn’t Bad Enough, This Guy Just Vaped a Tide Pod

Most millennial move ever? 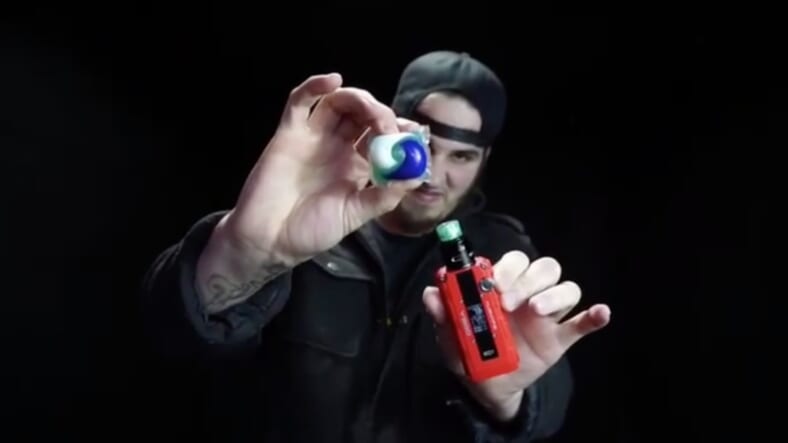 As you probably know by now, the latest ridiculous internet trend is something called the “Tide Pod Challenge,” where, as the name blatantly implies, brainless millennials are chomping down on Tide Pods and attempting to eat them.

The reason why anyone would do this is unclear, and the only explanation I can offer is that some people lack the minimum intellect and common sense required to recognize that a package of laundry detergent is, in fact, not a tasty fruit snack intended for human consumption.

And despite there being a printed warning on the detergent box where it clearly states: “Harmful if swallowed or put in mouth. Seek immediate medical attention if incident occurs,” people are just like “Yikes…that sounds serious,” and proceed to put a Tide Pod in their mouth and swallow it, proving they are certified idiots.

Can’t handle vodka? The only logical thing to do is chase with pods @amherstbarstool

Wow, I really wish Darwin were here to see this. He’d be pleased to know his theory on natural selection is absolutely accurate.

Anyway, now, one particular dunce took the challenge a step further and vaped the toxic contents of a Tide Pod, thereby confirming he is also a certified idiot.

He starts his neat party trick by poking a hole in one, squeezing the soap into his vape, and filling his lungs with clean scent of Tide. Sure, he chokes at first, but he quickly regains his composure and blows some nice smoke rings.

But I guess he’s the only person on earth dumb enough to blow smoke rings with laundry detergent, so I’ll give him brownie points for creativity.

I just want to take a moment to look at my favorite moment in the entire video:

You know what makes this whole “Tide Pod Challenge” situation super sad? Tide (and every other detergent brand out there) has tons of commercials and warnings where they encourage parents to lock up household detergents so infants and children don’t accidentally poison themselves, but never in a million years would Procter & Gamble have thought grown ass adults would eat them for fun.