T.J. Miller Was Arrested After Allegedly Calling in a Fake Bomb Threat While Drunk

The ‘Deadpool 2’ star was reportedly arguing with a female passenger. 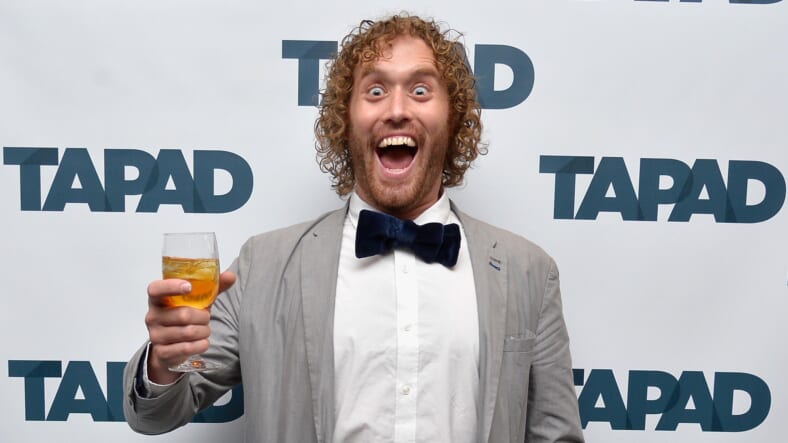 T.J. Miller was arrested in New York City for allegedly calling in a false bomb threat while he was intoxicated.

The former Silicon Valley star alerted authorities that a woman aboard an NYC-bound Amtrak train “had a bomb in her bag.”

A statement from the United States Department of Justice has further details:

Miller called a 911 dispatcher in New Jersey and reported that he was on Amtrak Train 2256 traveling from Washington, D.C., toward Penn Station in New York City, and that a female passenger “has a bomb in her bag.”MILLER described the woman as having brown hair and a scarf. By the time Amtrak investigators received notice of the call and were mobilized to stop and search the train, the train was in Connecticut.Amtrak officials stopped Train 2256 at Green’s Farms Station in Westport, where passengers were directed to detrain, and bomb squad members boarded and searched the train. No evidence of any explosive device or materials was detected.

It appears that Miller mixed up two trains, as “investigators determined that Miller had actually been on Amtrak Train 2258, not 2256.” Perhaps this was due to the fact that he was also very drunk, according an attendant working in his First Class car.

The attendant stated that MILLER appeared intoxicated upon boarding in Washington, that he consumed multiple drinks on the train, and that he had been removed in New York owing to his intoxication. The attendant also advised that MILLER had been involved in hostile exchanges with a woman who was sitting in a different row from him.

The officer who received the 911 call also “detected slurring in Miller’s voice” and asked if he had any history of mental illness.

Miller reportedly replied, “No, absolutely not. This is the first time I’ve ever made a call like this before. I am worried for everyone on that train. Someone has to check that lady out.”

Investigators did just that and “determined that that she was not carrying any explosives, was not checking a ‘carry on suitcase with a handle,’ was not ‘checking her bag without taking anything out,’ and would have been largely out of Miller’s view unless he repeatedly stood up to observe her over or around the intervening seat row, or rows.”

The complaint further alleges that MILLER, motivated by a grudge against the subject female, called 911 to relay false information about a suspected bomb on the train, and continued to convey false information to investigators while the public safety response was ongoing.

Miller was arrested at LaGuardia Airport in Queens and “charged by federal criminal complaint with intentionally conveying to law enforcement false information about an explosive device on a train.”

He faces a maximum sentence of five years in prison if convicted, which could make it difficult to promote Deadpool 2 this summer.