Hurry boy, it’s waiting there for you. 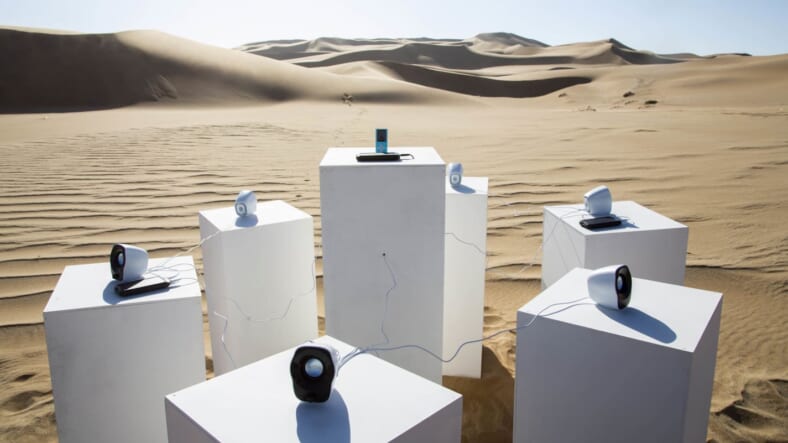 In 1982, Toto released the now-iconic song,”Africa,” which became the unofficial anthem of the internet (and perhaps the world) 30-some years later.

Now, “Africa” has returned to its homeland to bless the rains in the form of a sound installation called “Toto Forever,” where the song will repeat ad infinitum in Namibia’s Namib desert.

Created by Namibian-German artist Max Siedentopf, the installation is meant to stay up for eternity, and features an mp3 player containing only the song in question attached to six speakers, all of which are solar powered so the blessings never stop.

“Set in the Namib desert, which is not only the oldest desert in Africa but the world, I set up a sound installation which pays tribute to probably the most popular song of the last four decades: Toto – Africa,” the artist described on his website. “The song is put on loop and the installation runs on solar batteries to keep Toto going for all eternity.”

The installation is located somewhere in the 1,200 mile-long Namib Desert, but Siedentopf won’t disclose the exact location. Speaking with CNN, he says it’s “like a treasure that only the most loyal of Toto fans can find.”

Is that a challenge?

Siedentopf shared a helpful map of the “approximate location” of his masterpiece:

In case anyone ever finds it, here’s an example of what you’ll see:

“Even though ‘Africa’ by Toto was released 1982 it is still very much present in today’s pop culture and frequently used for memes and even entire Reddit pages are dedicated to the song,” he says.

“I was very intrigued by this and wanted to pay the song the ultimate homage and physically exhibit ‘Africa’ in Africa.”

“Toto Forever” joins other “Africa” tributes including the website ibless.therains.downin.africa where the music video loops for eternity, the “Africa” Twitter bot that tweets random lyrics from the song every three hours…

I bless the rains down in Africa

Gonna take some time to do the things we never have