“She started loosening his pants, and I was like, ‘Alright, I know where this is going.'” 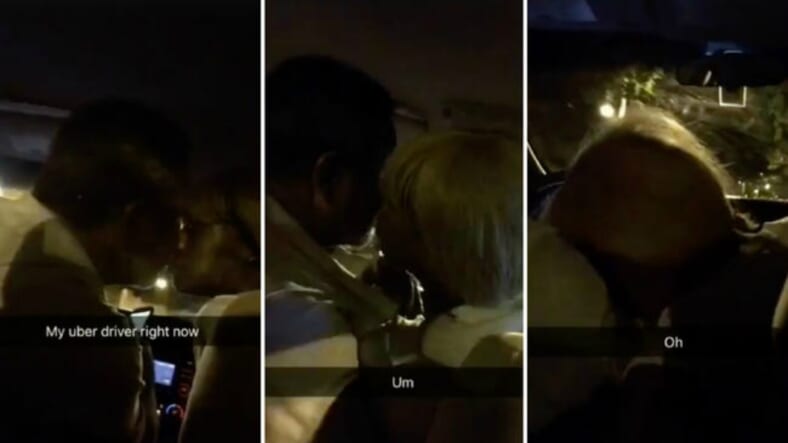 Here’s the full story: After a fun night out, normal, unsuspecting dude Aner Manuel did exactly what most of us do after a boozy night on the town — called an Uber at 3 in the morning. Totally normal.

But when he got in the Uber, he saw that there was someone else in the car, too. Not normal, considering it was not an Uber pool.

“It was late, I was like, ‘Ah, I’ll get in,'” Manuel told Esquire. “I figured it was a family member or something.”

Haha. Not even close. Turns out the other person was a drunk prostitute who was there to “service” the driver with some road head.

“I think he assumed at that time of night I was too intoxicated to notice what was going on,” he said. “At that point, she started loosening his pants, and I was like, ‘Alright, I know where this is going.'”

So, he took a video of the drunk prostitute going down on the Uber driver while Tyrone Davis’ 1979 soul hit “Be With Me” played in the background. You know, because mood music is important.

Seeing as how that’s a really, really uncomfortable situation to experience, let alone at 3 in the morning, Manuel says he jumped his ass right out of that damn car.

When he contacted Uber to complain about his driver getting sucked off by a prostitute, Uber was like “Oh shit, sorry” and said they’d investigate, and gave him a whopping $10 credit to make up for the trauma.

After four days and no word from Uber, Manuel posted the video online, and only after it got shared 124 times did Uber take notice and fire the dude.

“The behavior of this former driver is appalling and is not tolerated on the Uber app. As soon as this situation was reported to us, we immediately removed this driver’s access,” Uber told Esquire in an email.

Well, at least he got fired, and Aner now has $10 for his next Uber experience. Definitely adequate compensation.