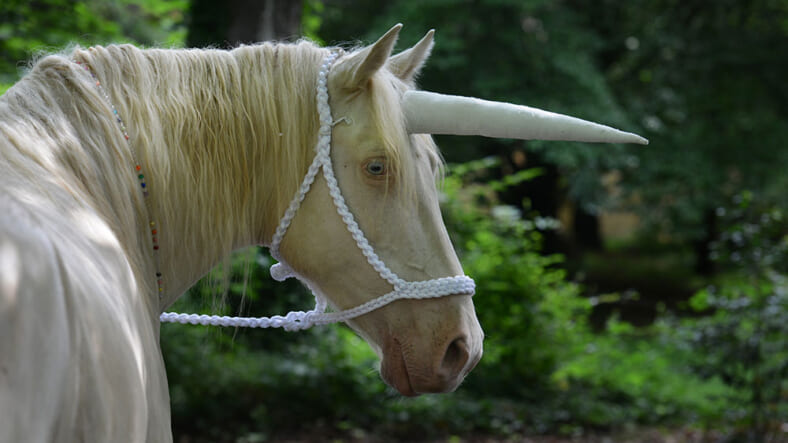 Imagine being stoned out of your mind or even just buzzed after a few beers and seeing a unicorn run down the street. How amazing/terrifying would that be? Well, it happened recently in Madera County, California: police spent hours tracking down Juliet, a white pony whose owner dresses her as a unicorn for photo shoots.

According to a report in USA Today, Juliet was an apparently unwilling participant in a shoot with some kids. Her owner, photographer Sandra Boos, told the paper her pony makes many little girls’ dreams into reality, but it seems Juliet was at the end of her rope where enduring the high-pitched squeals of ecstatic little girls was concerned, and tried to escape.

Boos reportedly corralled her unwilling equine the first time, but the second time Juliet made like a race horse and took to the mean streets, fake unicorn horn bobbing like an outraged middle finger:

“I was shooting, but I assume she got free and was like, ‘Oh, well I’m going to run,’ and she took off,” Boos said in a phone interview.The California Highway Patrol tried for almost four hours to catch Juliet on the ground, as a helicopter helped track the horse from the air, Boos said.Juliet eluded all efforts at capture, until Boos’ friend rode up on a horse.

The other horse did the trick, apparently. Seeing a friendly and familiarly long face, Juliet seemed happy to return to the safety of a pen. Boos told USA Today she heard police radio traffic, an officer—we hope in a very solemn voice—stating that the unicorn was “in custody.”

We’re glad Juliet was safely taken home again. And while it’s regrettable she chose to abandon her duties so dramatically, who can really blame her?