“The Navy considers the phenomena contained/depicted in those three videos as unidentified.” 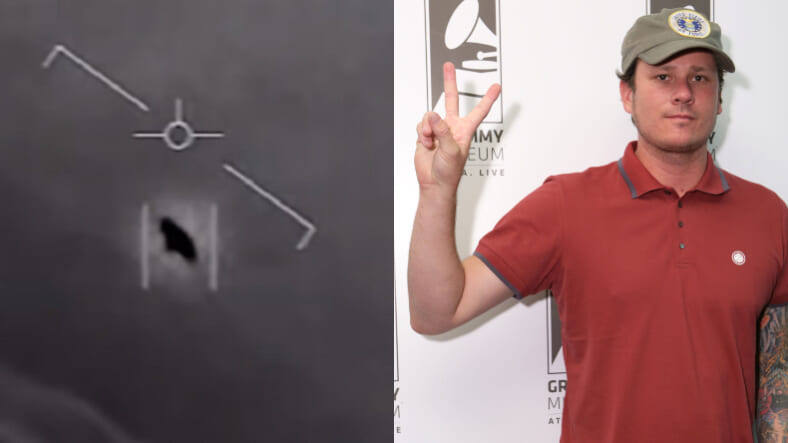 Three purported UFO videos made public by former Blink-182 singer Tom DeLonge through his To The Stars Academy of Arts and Science research company have been acknowledged by the U.S. Navy to show “unknown” objects in American airspace.

Speaking to Vice’s Motherboard, Navy spokesperson Joseph Gradisher said that “the Navy considers the phenomena contained/depicted in those three videos as unidentified.”

DeLonge’s To the Stars Academy research organization released a video recorded on January 21, 2015 that shows an object flying quickly over a body of water.

According to the video’s description, “This footage was captured by a U.S. Navy F/A-18 Super Hornet using the Raytheon ATFLIR Pod that was being operated by a highly trained aerial observer and weapons system operator whom the government has spent millions of dollars to train.”

The “Navy encounter that occurred off the East Coast of the United States in 2015 and the object in view remains unidentified.”

Another video, which is now known to have also been recorded on January 21, 2015 thanks to a request for information by John Greenwald, founder of declassified government document curator The Black Vault, was also released by To the Stars Academy. It shows another “unidentified aerial phenomenon (UAP)” flying against high winds above the clouds and rotating.

The third video in question was originally brought to the public eye by The New York Times in December of 2017 and was later released by To the Stars Academy. It shows a strange flying object that was recorded with an F-18 gun camera on November 14, 2004 off the coast of San Diego.

More from the NYT:

“These things would be out there all day,” said Lt. Ryan Graves, an F/A-18 Super Hornet pilot who has been with the Navy for 10 years, and who reported his sightings to the Pentagon and Congress. “Keeping an aircraft in the air requires a significant amount of energy. With the speeds we observed, 12 hours in the air is 11 hours longer than we’d expect.”In late 2014, a Super Hornet pilot had a near collision with one of the objects, and an official mishap report was filed. Some of the incidents were videotaped, including one taken by a plane’s camera in early 2015 that shows an object zooming over the ocean waves as pilots question what they are watching.“Wow, what is that, man?” one exclaims. “Look at it fly!”

“I very much expected that when the U.S. military addressed the videos, they would coincide with language we see on official documents that have now been released, and they would label them as ‘drones’ or ‘balloons,'” Greenwald told Motherboard.

“However, they did not. They went on the record stating the ‘phenomena’ depicted in those videos, is ‘unidentified.’ That really made me surprised, intrigued, excited and motivated to push harder for the truth.”

While none of this proves that aliens exist or have even visited Earth, one thing’s for sure: No one knows what the hell these things are and that’s weird enough as it is.