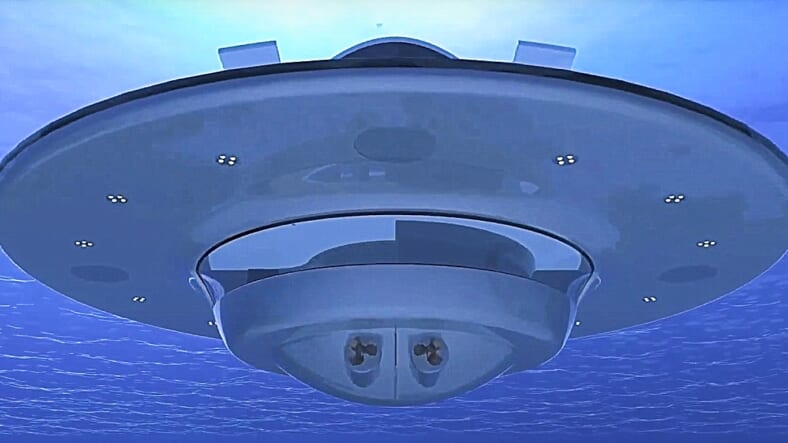 As the Pentagon gets ready to issue a landmark report in June on UFO sightings, the U.S. Navy has revealed that military encounters with mysterious objects have not been limited to lights in the sky. The Navy has encountered Unidentified Submarine Objects (USOs) as well, and if anything the reports indicate these mystery machines — or whatever they are — have even more impressive abilities than previously imagined.

This footage is unclassified. Still images of this footage were included in the May 1st, 2020 UAPTF intelligence briefing that I have previously reported on.

The image up top is of an earthbound mini-yacht design by Pierpaolo Lazzarini for Italy-based Jet Capsule. It doesn’t have special powers as far as we know and is meant for humans.

That is, one of Lazzarini’s yachts can’t dive beneath the surface of the ocean as seen in the video above, and then take off at a rate of speed that should be impossible.

The Express reports that journalist Tom Rogan, in an appearance on Fox News, blew host Tucker Carlson’s mind with some details about USOs:

Mr Rogan said: “Relevant to this video, an area we will learn more about is the interaction between US Navy submarines – nuclear ballistic submarines and attack submarines – picking up sonar contact of things moving at hundreds of knots under the water.“There is an undersea dimension to this, on top of what the pilots are seeing above water.”Mr Carlson responded: “Hundreds of knots under water? I don’t think people can even digest that.”

One knot equals 1.15 mph, so if we assume Navy data is available proving evidence of USOs traveling at a minimum of 200 knots, that’s 230 miles per hour. That’s supercar speed, and yes, it’s mind-boggling.

As weird as all the UFO news released in the run-up to the Pentagon report has been, it gets even weirder when public figures not known for saying crazy things chime in, like former US president Barack Obama, who said in a CBS interview that yes, “there’s footage and records of objects in the skies, that we don’t know exactly what they are, we can’t explain how they moved, their trajectory.”

“They did not have an easily explainable pattern,” Obama continued, “And so, you know I think that people still take seriously trying to investigate and figure out what that is.”

It’s hard to believe after decades of nonstop hand-waving and obfuscation the US military and the government, in general, are now flat-out admitting UFOs/USOs are real.

It’s even harder to believe that it is likely much more may come out in June when the Pentagon presents its report.

The famous X-Files slogan was apparently right all along — the truth is out there and we’re about to learn it.