Watch This U.S. Navy Ship Destroy a Drone With a Laser Cannon

“We are redefining war at sea…” 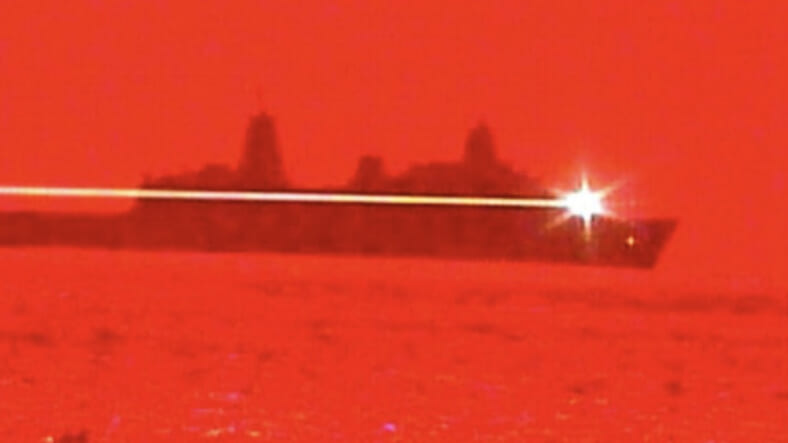 The U.S. Military now has the capacity to shoot drones and other airborne vehicles out of the sky with frickin’ laser beams. As Capt. Karrey Sanders—commanding officer of the ship that fired the historic shot, the U.S.S. Portland—said in a statement, with one dramatic shot they “are redefining war at sea for the Navy.”

The dramatic demonstration took place in the Pacific Ocean and the Navy released video and a statement almost a week later, on May 22.

LWSD is a high-energy laser weapon system demonstrator developed by the Office of Naval Research and installed on Portland for an at-sea demonstration. LWSD’s operational employment on a Pacific Fleet ship is the first system-level implementation of a high-energy class solid-state laser. The laser system was developed by Northrup Grumman, with full System and Ship Integration and Testing led by NSWC Dahlgren and Port Hueneme.

Capt. Sanders was quoted in the statement, saying that in “conducting advanced at sea tests against UAVs and small crafts,” the Navy “will gain valuable information on the capabilities of the Solid State Laser Weapons System Demonstrator against potential threats.”

Laser weapons aren’t a new idea, of course. According to its own statement the Navy has been “developing directed-energy weapons (DEWs), to include lasers, since the 1960s.”

In an article published the same day, May 22, the Washington Post also noted that the Trump administration has discussed possibly resuming nuclear tests as well, quoting an unnamed senior administration official who said there is “very much an ongoing conversation” inside the government regarding this possibility.

As long as they haven’t successfully attached the laser beams to sharks, it doesn’t look like we have too much to worry about—yet.