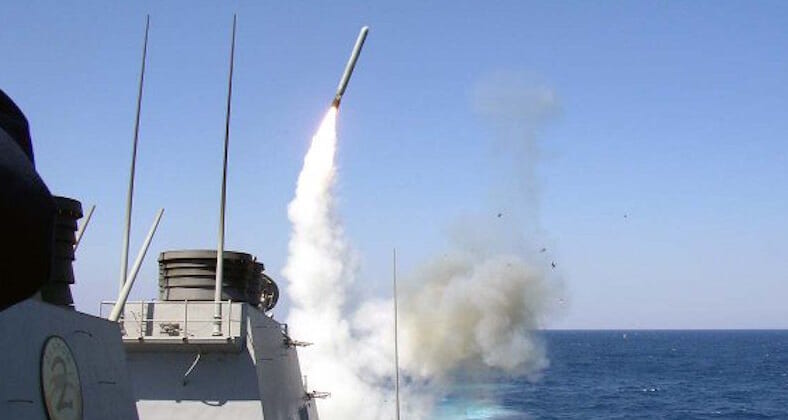 On Friday the forces of the United States, France, and the United Kingdom targeted chemical weapons sites in Syria in a combined air assault, including over 100 missile strikes. These came almost exactly a year after an assault launched in April 2017.

The video footage above shows the launch of a Tomahawk missile from a sub, the fast-attack Virginia-class USS John Warner. It’s a stunning close-up display of force as the missile blasts from the water then arcs toward its destination.

France contributed Rafale fighter jets, frigates, and its own cruise missiles. President Emmanuel Macron tweeted video of the Rafales taking off on their mission.

In addition to subs like the John Warner, the United States came fully loaded and ready for anything. CNN reports “Pentagon officials said the US Air Force used two B-1B bombers in the Syria strike.” That’s along with warships, destroyers, and battle cruisers.

While President Trump termed the attacks “perfectly executed” and said the mission was accomplished, US Ambassador to the United Nations Nikki Haley told the UN Security Counsel that the United States is “prepared to sustain this pressure, if the Syrian regime is foolish enough to test our will.”

Russia is an ally of Syria. Reuters reports that on Sunday Vladimir Putin issued a warning that “further Western attacks on Syria would bring chaos to world affairs.”

Kind of seems like the chaos is already almost here.

At least the West is obviously prepared if it gets worse.