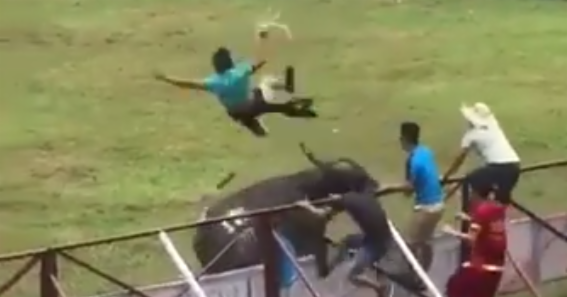 A disturbing video of a water buffalo trainer being gored to death by one of his raging bulls has gone viral.

The above footage was taken during the Do Son buffalo fighting festival in the Vietnamese port city of Hai Phong. It’s has been viewed over 100,000 times on Facebook since it was uploaded six days ago.

The first seconds show two of the horned beasts brawling before one briefly exits the arena. At around the 50 second mark, the crowd begins to shout as the camera pans over to show the buffalo charging back into the arena at full speed towards its trainer, Dinh Xuan Huong.

The initial blow knocks Huong to the ground. The enraged animal then appears to impale the dazed 47-year-old man with one of its horns and flings him several feet in the air. Huong can be seen crawling on his knees before he’s struck in the back of the head one final time.

Looks like the recent spate of gruesome bullfighting injuries–in which matadors were gored through their throats, eye sockets, and even rectums–have just been one-upped by this singularly pissed-off water buffalo.

The man was gored in the thigh, chest and neck and was unconscious when transported to hospital where he later succumbed from his injuries.  Authorities have accused festival organizers of failing to provide adequate safety measures.

They also ordered doping tests to be carried out on all buffaloes at the event to check for performance enhancers and banned substances which may have been used to heighten the animals’ aggression.The buffalo which killed its owner will likely be put down, authorities said

VN Express reports that no one has ever been injured in the festival’s 40-year-run, but the remainder of this year’s events have been suspended.

So if you were heading to Vietnam to check out a Buffalo Fighting Festival, you’re shit out of luck, you sick bastard.