Fellow musicians are already paying tribute to the metal legend. 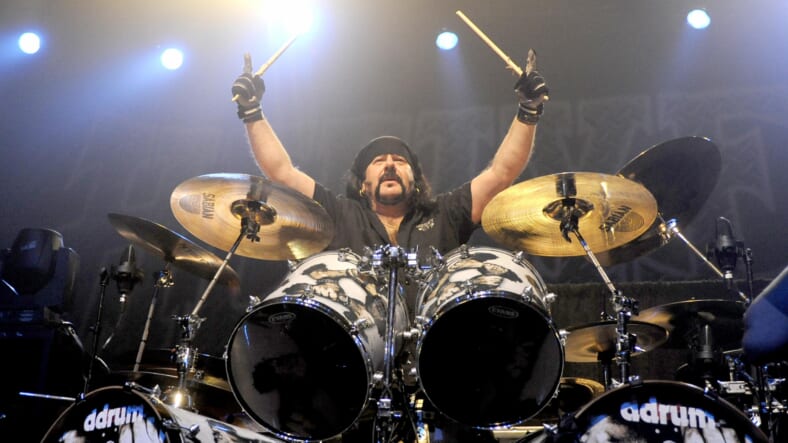 Vinnie Paul, the legendary drummer of Pantera, Damageplan and Hellyeah, is dead at age 54.

The tragic news was confirmed on Pantera’s Facebook page.

Billboard reports that Pantera earned four Grammy nominations and released nine albums that broke into the Billboard 200 over its career.

A signature “groove metal” style was exhibited on 1990’s Cowboys From Hell, 1992’s Vulgar Display of Power, and the chart-topping 1994 album Far Beyond Driven. Many consider all three to be classics.

The Abbott brothers officially disbanded Pantera in 2003 and immediately formed Damageplan. During a performance in 2004, Dimebag Darrell was shot and killed by a crazed fan.

Paul then formed metal “supergroup” Hellyeah in 2006 with Mudvayne singer Chad Gray and Nothingface guitarist Tom Maxwell. He recorded five albums with the group, the most recent being 2016’s Undeniable.

Slash, Lars Ulrich, and Alice Cooper are just a few of the fellow rockers who posed tributes to the late musician on Twitter.

Thank you for all the good times, Vinnie…your incredible hospitality and warm vibe was infectious and inspiring. Here’s to another shot of Crown Royal and a next level game of air hockey down the road! RIP, brother. Much love. ❤️ pic.twitter.com/ehNXoO88jY

Vincent Paul Abbott aka Vinnie Paul has passed away.
Paul is best known for his work as the drummer in the bands
Pantera and Hellyeah.
No further details are available at this time.
The family requests you please respect their privacy during this time. pic.twitter.com/4yCzabmWVt

Rock in peace Vinnie Paul
Say hi to brother Dime from all of us
We love you . Wish you were still here. Gone too soon man . Thanks for the music. And more importantly 30 years of non stop friendship. How rare is that In this business? I'm really gonna miss you 💕 pic.twitter.com/LUY41pzC0l

I just woke up in Belgium to the news that my friend Vinnie Paul has passed away. Another metal hero taken too soon. Say hello to Daryl for me. Rest In Peace, my dear friend. @Pantera @hellyeahband #vinniepaul

GOD BLESS VINNIE PAUL – 1964-2O18 – FATHER VINNIE,Your Compassion for others & Your Love for seeing everyone around you Happy I will never forget – Your Heart of Gold Made The World a Better Place – Go be w/Your BELOVED BROTHER – I LOVE YOU – tBLSt SDMF pic.twitter.com/8VC3T3hQa2

Terribly saddened by the news of Vinnie Paul’s passing. Vinnie was a beloved fixture in the rock and metal communities and we will miss seeing him out on the road. His impact on heavy music is immeasurable. Rest In Peace Vinnie, condolences to your family, friends and fans.

Tragic news about Vinnie Paul today. He was one of the warmest people I knew. A truly good & fun friend. We're going to miss you more than you could possibly have known. RIP buddy. https://t.co/yQqruY4tio

FUCK!!! Just waking up here in Belgium to the news of Vinnie Paul…I’m in total shock…Heaven just got a little crazier with the Abbott Bros back together again…RIP Bro 😢 pic.twitter.com/HkC2yVaqtu

FUCK!!! Just waking up here in Belgium to the news of Vinnie Paul…I’m in total shock…Heaven just got a little crazier with the Abbott Bros back together again…RIP Bro 😢 pic.twitter.com/HkC2yVaqtu

Sad to hear about my friend Vinnie Paul’s passing. One of the true great ones. He’ll truly be missed. RIP Brother.

Our deepest condolences go out to the friends, fans, family, and loved ones of our friend, Vinnie Paul.

The World has lost another legend. He was an inspiration and a good friend… We will miss you Vinnie Paul. R.I.P. pic.twitter.com/KhCy2HKgMW