This deformed cat is now richer than you are. 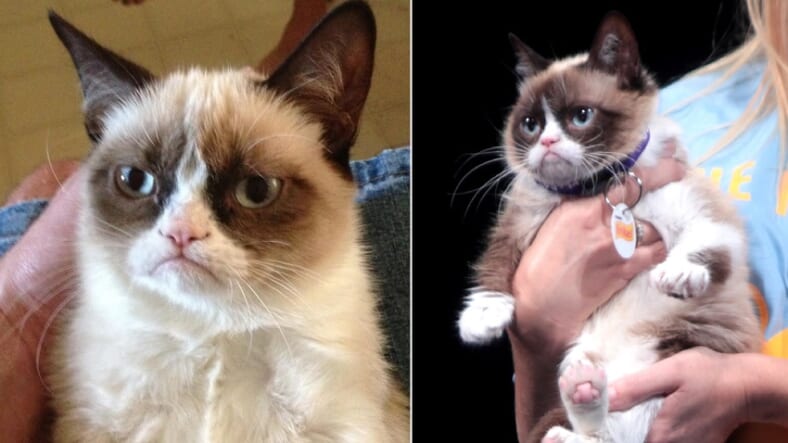 When you come at the cat, you best not miss. As Grenade Beverage Company in Santa Ana, CA just learned, the Grumpy Cat Empire will end you if you step out of line.

It probably doesn’t come as a surprise that Grumpy Cat’s viral fame translated into dollars for the kitty—real name “Tardar Sauce”—and its owner, Tabatha Bundesen. That included a whole host of branded stuff, everything from mugs to books.

The Washington Post reports that things were originally fine between Grumpy Cat Limited and Grenade. The beverage company was set to sell Grumpy Cat Grumppuccino, an iced coffee drink that hopefully tasted nothing like cats.

Then Grenade reportedly altered the deal. They came up with unsanctioned Grumpy Cat Roasted Coffee. According to the Post, that was a bad idea. “Despicable,” even:

“Ironically, while the world-famous feline Grumpy Cat and her valuable brand are most often invoked in a tongue-and-cheek fashion, Defendants’ despicable misconduct here has actually given Grumpy Cat and her owners something to be grumpy about,” the complaint stated.
Grumpy Cat Limited also claimed that Grenade was also selling unauthorized Grumppuccino T-shirts which “blatantly infringe on the Grumpy Cat copyrights and Grumpy Cat trademarks” without sharing the profits and that the beverage company wasn’t paying the agreed-upon percentage of profits from the iced coffee.

Grenade did what you do in that situation: counter-sue. They claimed that Grumpy Cat Ltd. hadn’t fulfilled its part of the bargain, neglecting to do any agreed-upon advertising for the product.

The coffeemakers threw a real zinger in their own suit, reports the Post, writing that Grumpy Cat’s people promised the angry-faced feline would star in some kind of mega-comedy along with the likes of Jack Black and Will Ferrell, automatically boosting the coffee’s profile, supposedly.

The famous furry-faced symbol of fury starred in a Lifetime movie instead, Grumpy Cat’s Worst Christmas Ever. An instant classic to rank up there with It’s a Wonderful Life, for sure.

In the end, however, the jury sided with the glaring cat, awarding the $710,000 to Grumpy Cat Ltd.

The corporation’s attorney reportedly stated that “Grumpy Cat feels vindicated” and that the verdict was “just.”

No one reported on the star’s actual response to winning its case. We can only assume Grumpy Cat batted a glass off a table then barfed up a celebratory furball or something.