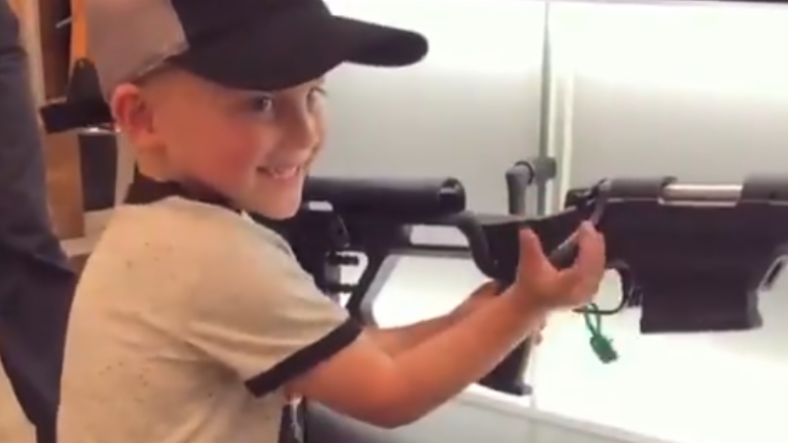 A viral video of a young boy repeatedly cocking and pulling the trigger of a gun at an NRA convention has sparked outrage across social media.

Hunter and outdoor enthusiast Kendall Jones prompts four-year-old Maverick to demonstrate his ability to handle an unloaded rifle. After repeatedly operating the firearm’s bolt action and trigger mechanism, he removes and inserts the magazine.

“That is adorable,” Jones says at the clip’s conclusion.

She posted the controversial footage to Twitter three days ago with the caption, “This video is INCREDIBLE! Parenting done RIGHT.”

As the video racked up millions of views, a heated argument over gun safety ensued. Many praised the boy’s parents for teaching their child firearm know-how, while others condemned the notion of a toddler playing with a weapon like it’s a “toy.”

Some gun owners even criticized the fact that he “dry fired,” i.e. pulled the trigger without chambering a round.

A child doesn't understand why he can't get candy, never mind what a gun can do to someone.

Everyone at the show knew the gun was loaded. By the way, I was in the military for almost 9 years. Was taught gun safety and how to shoot. Also, I am an airline pilot and I carry a gun.

We are in hell world pic.twitter.com/ACw0EoLJml

He’s playing with it exactly like it is a toy.

I can't help but notice that little Mr. Safety didn't check to see if the gun was loaded.

The mother knows the gun is empty. Duh!!!!

The kid's just a little over excited, he'd be crashing a toy train together if he were at a model railroad shop, or banging pots and pans in kitchen supplies. Just like in a real kitchen using a stove, he would need to be more calm at a range, when ammo is involved.

No safety about it — parents haven't taught him the most basic rule: Never pull the trigger unless you're shooting.