That’s one way to go AWOL. 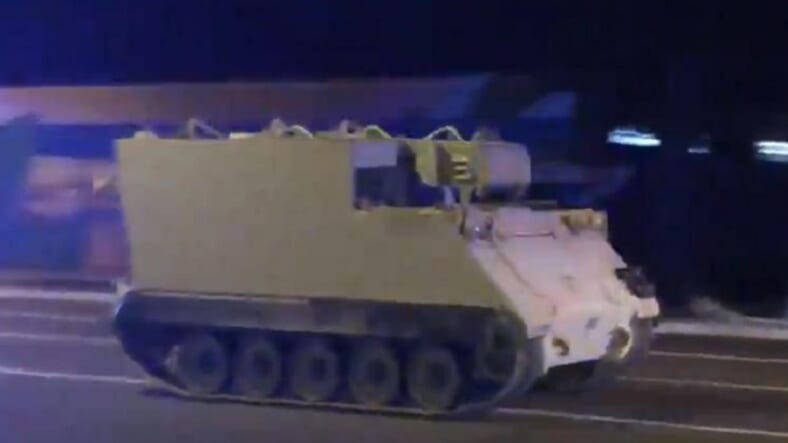 A soldier at the Fort Pickett National Guard base in Blackstone, Virginia, picked one hell of a way to go AWOL Tuesday. He climbed in one of the Guard’s tank-like Armored Personnel Carriers (APC) and took off for parts unknown.

Or his destination was unknown at the time. The unnamed soldier became the focus of a police chase that ended in downtown Richmond. A chase that certainly got a lot of attention as it continued for two hours through Virginia.

The APC wasn’t armed but it certainly could do plenty of damage anyway. Urgency grew as it continued down I-95 at about 40 mph.

Reuters reports that once the vehicle was inside the Richmond city limits, combat rifle-wielding police stood guard at the entrance to the city’s Capitol Square and a police helicopter kept track of it with a spotlight.

The insanity ended in downtown Richmond near a hospital, and the soldier was taken into custody. Some reports have described him as “disgruntled,” and the New York Post reported that he is a “Virginia Army National Guard Lieutenant and a commander with an engineering battalion.”

The chase blew up on social media.

Brother in law is a SWAT officer in the #RVA area and snapped this picture tonight of the crazy tank like vehicle that fled from Fort Pickett. Chase ended downtown near the Children’s Hospital. pic.twitter.com/4GYy7r0BC6

Yoooo 😂 someone stole a fucking tank and there’s a chase going on in dinwiddie lmao pic.twitter.com/ObBThGvVg7

A fucking tank just sped past my house with 15 squad cars and a copter In chase. I kid you not

So did I just witness a police chase on 95 some cop killer in a army tank truck followed by 200 chesterfield cop cars?

This is INSANE! Someone has hijacked a “Tank-like” vehicle from Fort Pickett and just drove it by our apartment! This is on Broad Street in the Fan. pic.twitter.com/EYfhFux1dk

The crazy thing is that this is actually a pretty tame incident. Actual tanks have been stolen in the past and done real damage. There was a minor tank rampage in San Diego in 1995, and in 2004, one man in what’s been termed a “killdozer” took out a good chunk of downtown Granby, Colorado.

If there’s one lesson to be taken from any of these events, it’s that maybe military bases should do a better job of locking up vehicles designed to destroy things on the battlefield.