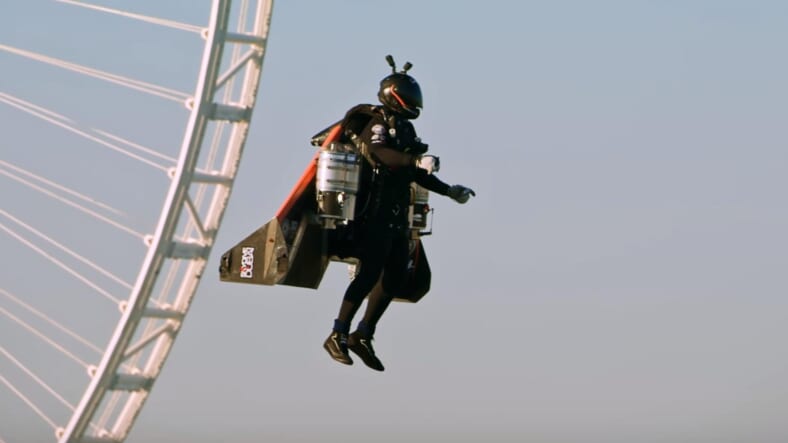 This is not a scene from some Marvel movie set. It’s real footage recently made in Dubai and published on the Instagram and Youtube accounts of Sheikh Hamdan bin Mohammed, the Crown Prince of Dubai.

What you see is a “Jetman” lifting off at the Dubai Marina then shooting out over the JBR waterfront community.

What’s unusual about this video isn’t that those cameras attached to the Jetman’s helmet make him look for all the world like an actual superhero with an insect name (FlyGuy, maybe, or Bug Dude, whatever). According to the Middle East edition of Esquire, it’s that this flight marked “the first time one of the Jetmen has been able to takeoff straight up in the air, more typical of Marvel’s Iron Man.”

Jetmen reportedly usually launch from choppers–they get a flying start. Make no mistake–having the technology to take off like a superhero is impressive. Even more impressive? The Jetman (in this case Vince Reffet) managed to fly just over a mile in altitude in three minutes.

In the past, that might have been the extent of a jetpack’s abilities. But Esquire M.E. reports that Jetmen can fly as fast as 160 MPH and travel a distance of nearly 35 miles.

How far off is the day when some souped-up and streamlined version of this kind of jetpack is available to the average consumer like some kind of skyborne motorcycle?

Eh, probably pretty damn far off for anyone with medium to medium-high income, given it seems like the mortality rate among lightly-trained pilots could potentially be insanely high.