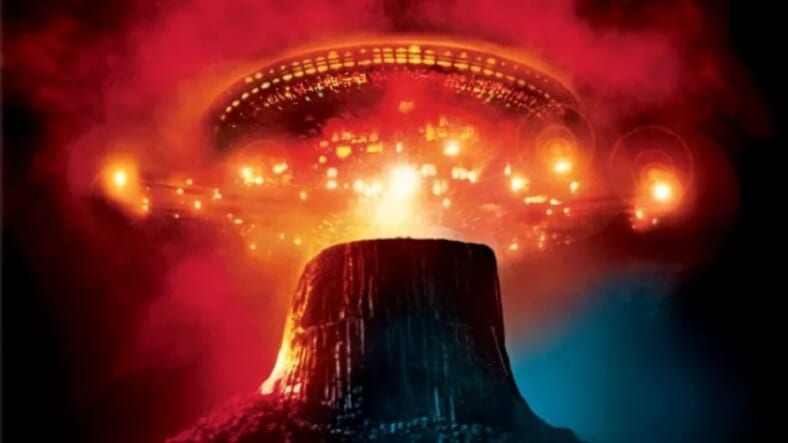 Strap in, because this is wild. Both the New York Times and the Washington Post have recently reported on a secret UFO investigation unit inside the Pentagon which—like a real X-Files—studied inexplicable, possibly even otherworldly phenomena.

The Advanced Aerospace Threat Identification Program (AATIP) was reportedly shut down in 2012, but not before it investigated true and bizarre events, like the pair of Navy Airmen who encountered a high-speed object which shot out of the ocean and flew away.

The Times published the formerly secret video seen above along with its report on the incident, which occurred in 2004.

According to a Times interview with Cmdr. David Fravor, what he and Lt. Cmdr. Jim Slaight—officers assigned to the U.S.S. Princeton—saw wasn’t vague or easily explained:

“Well, we’ve got a real-world vector for you,” the radio operator said, according to Commander Fravor. For two weeks, the operator said, the Princeton had been tracking mysterious aircraft. The objects appeared suddenly at 80,000 feet, and then hurtled toward the sea, eventually stopping at 20,000 feet and hovering. Then they either dropped out of radar range or shot straight back up.The radio operator instructed Commander Fravor and Commander Slaight, who has given a similar account, to investigate. The two fighter planes headed toward the objects. The Princeton alerted them as they closed in, but when they arrived at “merge plot” with the object — naval aviation parlance for being so close that the Princeton could not tell which were the objects and which were the fighter jets — neither Commander Fravor nor Commander Slaight could see anything at first. There was nothing on their radars, either.

It doesn’t get less weird, either. Fravor reported the seas were calm, but he observed a disturbance around something lurking just under the surface, indicating weight and presence. It reportedly looked like a pot of water beginning to boil.

Then about 50 feet above that region was a pale object or aircraft, described as “40 feet long and oval in shape.”

As Fravor piloted his plane closer, the object suddenly zipped away. “It accelerated like nothing I’ve ever seen,” Fravor reportedly said, and the experience left him “pretty weirded out.”

The Washington Post published its own report detailing how intelligence officer Luis Elizondo, the former head of the AATIP, sought to make some of the evidence public. He reportedly outlined his reasons in an internal memo:

Elizondo […] argued that the images could help educate pilots and improve aviation safety. But in interviews, he said his ultimate intention was to shed light on a little-known program Elizondo himself ran for seven years: a low-key Defense Department operation to collect and analyze reported UFO sightings.

The Defense Dept. finally acknowledged AATIP existed on Saturday. The Post quoted a memo in which a Pentagon spokesman explained the DOD “determined that there were other, higher priority issues that merited funding.”

Here’s why we mentioned Tom DeLonge: The existence of AATIP was actually made public by Elizondo at the former Blink-182 vocalist’s unveiling of his To the Stars Academy in October.

Elizondo is, as the Post confirmed, a consultant there.

As the Times noted, there are frequently real-world reasons for unknown objects and strange events. Humanity doesn’t entirely understand Earth yet, let alone the vast reaches of outer space.

Still, it’s looking like Tom DeLonge is onto something, and our minds are blown.