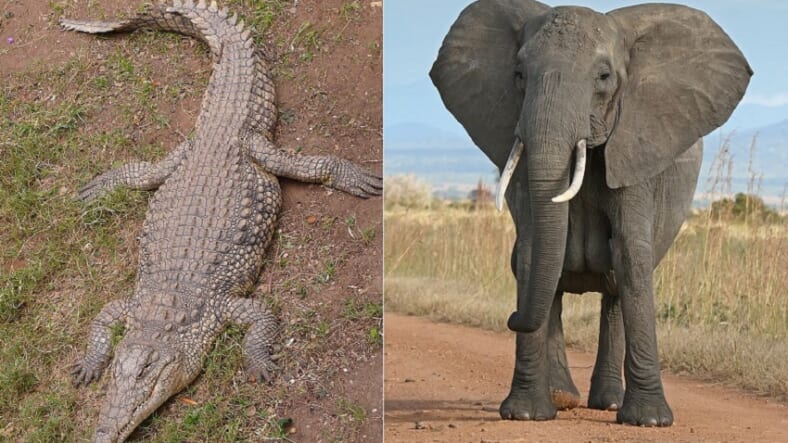 Crocodiles are assholes. Sure, all species have to eat, and it’s a sad fact of nature that predators will prey. But as the video above makes clear, crocs—in this case, the Nile Crocodile—don’t give a damn about going after smaller, weaker creatures when they hunt. They will take all comers.

This time, though, one big lizard clearly bit off way more than it could ever hope to chew.

The video above was shot in Malawi’s Liwonde National Park from a touring boat, reports Mashable. The story is pretty straightforward, and as the reactions of tourists heard on the audio indicates, probably much more intense in real life: A herd of elephants were going for a drink. One of the young pachyderms dipped its trunk in and pulled back a friggin’ crocodile. And the croc wasn’t about to let go.

The entire pack seemed to trumpet as one in distress, then one of the adult elephants stepped in—decisively, apparently stomping and goring the big reptile away. The young elephant is crocodile-free at the end, and the herd apparently begins to back away, just as a group of people might when seeing someone holding a gun.

The visual was striking enough, but the sound of all those giant creatures blaring an alarm is pretty spine-chilling all by itself.

When you see this then recall an earlier video in which a horse delivered a thorough ass-whipping to a hungry alligator, it looks like the score right now is reptiles 0, mammals 2.

Team Mammals for the win.