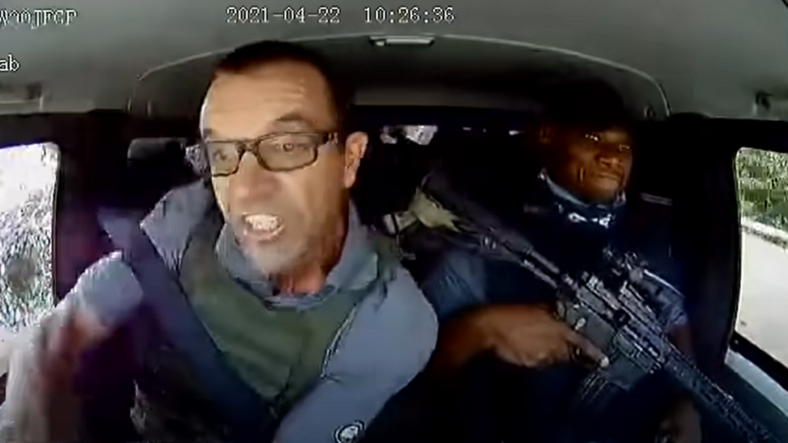 Driving armored cars and handling loads of cash all day is likely a pretty routine job, but all security guards charged with moving money from point A to point B have to have nightmares like this video.

In this in-cab security footage, we see a pair of South African CIT (Cash In Transit) guards quietly driving along on April 22, 2021. It seems like a regular day.

Then pops start sounding as robbers converge on the moving vehicle firing assault rifles, and the driver (South Africans drive on the left side of the road like the British) kicks into badass mode in a heartbeat.

The driver, Leo Prinsloo, could be someone’s dad hauling kids around to Little League games with his mild-mannered look, but he has serious tactical skills. This SA Trucker report indicates he is a retired cop.

His partner, identified in South African publications as Lloyd Mthombeni, looks petrified from the first shot, which failed to penetrate the bulletproof glass, but he’s in the zone as well by the time the driver hands him a phone and tells him to call someone. Here are more details from SA Trucker:

National Police spokesman, BrigadierVish Naidoo said: “On Thursday, 22 April, a group of men tried to rob a CIT vehicle on the N4 in Pretoria. The suspects fired several shots at the CIT vehicle in an attempt to stop it during a high speed chase.“The driver of the CIT vehicle managed to evade the robbers for a while but later stopped in wait for the robbers. The robbers fled without taking any money. No arrests have yet been made.”At the end of the video, the retired cop grabs the rifle from his [companion] and springs into action.

The robbers likely realized they were in over their heads if they saw that Prinsloo not only evaded them but got far enough ahead to wheel around and lay in wait. They fled the scene.

That proved even smarter than they probably knew, as Prinsloo isn’t merely a retired law enforcement officer — he’s a legit all-around operator and was more than well-equipped to handle this situation, as The Citizen reports:

Pretty sure Leo Prinsloo couldn’t make a better commercial for advertising his skills than this security footage.

Since police are still investigating the robbery attempt, neither Prinsloo nor partner Lloyd Mthombeni have commented on the video. But that’s okay, because it speaks for itself.