Marijuana Leads to Better, More Frequent Sex, According to Science

Take a hit—then hit it. 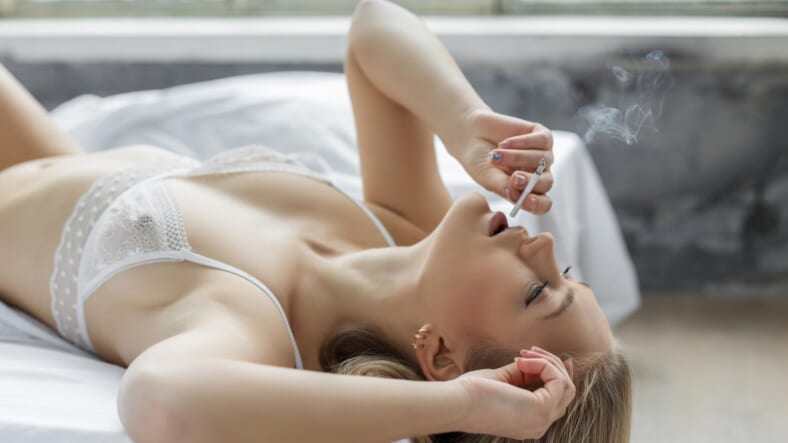 If you’ve ever smoked weed before, you don’t need a team of researchers to tell you that everything is better when you’re high. Food tastes better, music sounds better, and, of course, sex definitely feels better.

But even though we know this as an undeniable fact, scientists at Stanford University went ahead and conducted a study to confirm what we already know: Weed takes sex to a whole ‘nother level.

For the study, which was published in the Journal of Sexual Medicine, researchers analyzed data from a massive group of 28,176 women and 22,943 men “to elucidate whether a relation between marijuana use and sexual frequency exists using a nationally representative sample of reproductive-age men and women.”

The study found that “marijuana use is independently associated with increased sexual frequency and does not appear to impair sexual function,” and moreover, it was revealed that people who toke up daily reported having 20 percent more sex than those who don’t smoke weed.

An additional JSM-published study entitled, The Relationship Between Marijuana Use Prior to Sex and Sexual Function in Women, conducted at Saint Louis University in Missouri also found that weed can significantly improve things in the bedroom, Forbes reports.

In this survey, researchers polled 133 sexually-active adult women at one particular, academic ObGyn practice, during their annual check-ups. The female patients filled out a lengthy questionnaire regarding marijuana use before sex (hashtag #MUBS).

Thirty-eight women (29%) disclosed consuming cannabis prior to copulation. Of those 38 women, 68 percent reported more pleasurable sex, 16% said it ruined their sexual experience, while the remaining 16% were undecided or unaware.

However, I would personally like to make note that not all weed is equally great for sex, and some strains might actually make you more catatonic than kinky.

So, if I may kindly offer my suggestions on three of the sexiest strains out there:

Generally used to relieve stress and muscle spasms, this indica strain is perfect for lowering inhibitions in the bedroom for some of the best sex you’ll ever have.

Energizing and uplifting, this sativa dominant hybrid gives you the lusty energy you need to do the do like a champ.

A potent sativa blend, Strawberry Cough gives you a deliciously tingly body high while giving your mood a nice boost. Just a hit or two of this, and you’ll be well on your way to weed-fueled ecstasy.